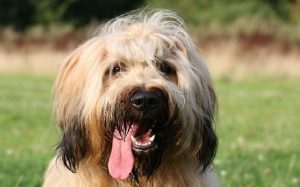 Briard dog is a large-sized dog that was originated in France. It has an alert and handsome appearance. It is a herding dog that has a high activity level is suited in an apartment as long as it gets the required amount of exercise.

Briard has a strong body with a large head that is covered with flowing hair. The ears are erect, giving them an alert expression. The coat is silky, long, and straight.

Briard was bred to be a herding dog and also the guardian of the flocks. It is also known as Chien Berger de Brie in its homeland. It was known for its bravery that could even fight wolves to defend the livestock.

Briard was introduced to the United States by Thomas Jefferson and the Marquis de Lafayette. Jefferson even said that Briard is the finest house and farm dogs he has ever seen.

The American Kennel Club recognized Briard in 1928 as a member of the herding group. It currently ranks 132 of 193 AKC registered breed.

Briard is very tolerant of children and does not mind their rough behavior if raised together. They are very protective of them and are always by their side guarding. However, with strange children, they tend to herd them by nipping at the heel. So, while taking them out to a place with lots of children, always keep them on a leash.

Temperament: The temperament of the Briard is brave, alert, and faithful. They are very alert of the activities going on in the surrounding. Therefore, they make an excellent watchdog and also a guard dog. Protective of their family, they are not afraid to face anything while defending its people.

Behavior: As a herding dog and guarding dog, Briard to herd small animals sometime and chase them around. However, they are also protective of the pets at home and will look after them like a big brother.

Personality: The personality of the Briard is smart, friendly, and lively. They are very playful and friendly with their family and make a great companion for an active family. They are smart and are quick at learning new instruction or commands.

Training Briard needs patience and firm leadership. Establish leadership on them when they are still young, so they see you as their leader and follow you. They tend to respond well to positive reinforcement, so reward them with delicious treats and use lots of vocal praises as the source of motivation and encouragement.

Never be harsh on them or use force hand. It will only lead to their aggression and they can even bite you. Train them with gentleness even if they make some mistakes.

The Briard is usually a healthy breed with only a few possible health problems.

The Briard comes in following colors and markings.

Size: The average height of the Briard is between 22-27 inches and the average weight is between 55-100 pounds.