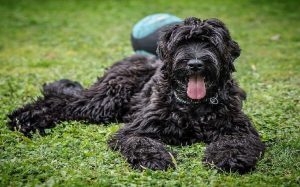 Black Russian Terrier is a medium to large-sized dog breed which was bred to be a military dog. They are a very active dog that needs an active owner with an open space house where they can perform their regular activities. They are not suitable for apartment life.

Black Russian Terrier is a powerful dog with a head that is proportionate to the body. The eyes are oval, set wide apart and the ears are medium length, triangular and set high. They have a double-coated, slightly wavy coat. The hair falls from the head to the level of eyes and their muzzle is covered with mustache and beard.

The origin of the Black Russian Terrier is in Russia as a working dog. It was created by the team of scientist and a group of breeders that wanted a super dog for the Russian army.

It was bred in a Red Star Kennel by the Soviet Army scientist as they need a military dog with a protective and suspicious towards strangers temperament. It was bred by crossing Giant Schnauzer with different breeds like Airedale Terrier, Rottweiler, and Newfoundland after World War II.

The American Kennel Club recognized this breed in 2004 as the member f the working group. It ranks 118 of the 193 AKC registered breed.

Black Russian Terrier is gentle and tolerant of small kids, so they make an excellent companion for them. They love spending time with them and are always protective of kids. Although they do great with children, their interaction should always be supervised as they might accidentally knock over small kids and hurt them.

Temperament: The temperament of the Black Russian Terrier is calm, intelligent, and affectionate towards its people. Although they are a calm dog, they are very protective of their people and guard them like a good guard dog. However, they do not tend to be aggressive but will alert their people by barking.

Behavior: Black Russian is a very active dog that needs regular exercise to keep itself healthy physically and mentally. If they do not get the required amount of exercise, they will become destructive and anxious. Therefore, take them out for a walk, run, play or hike regularly.

Personality: The personality of Black Russian Terrier is friendly, active, and suspicious. It is a great family companion it is loving and affectionate towards its people. It is protective of its people and their property due to which they are suspicious of any approaching strangers.

Training Black Russian Terrier is not a hard job to do as they are eager to please their owner. Although a firm and consistent leadership are needed. If you do not develop a leadership upon them, they will take themselves as a leader and training will become tough after that.

Reward them with treats and lots of vocal praises which will encourage and motivate them to be focused on the training.

The Black Russian Terrier is generally a healthy breed with few possibilities of hereditary health problem.

Size: The average height of the Black Russian Terrier is between 26-30 inches and the average weight is between 80-130 pounds.