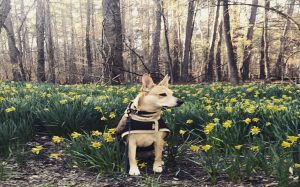 The Carolina Dog which is also known as American Dingo, Dixie Dingo, Yaller Dog or Yellow Dog is a feral breed of dogs that is medium in size which originated in the southeastern part of the USA.

A Carolina dog has pointed ears, a fox-like snout and a tail that curves like a fishhook when raised. They look similar to Australian Dingos but fall under the Canis family of dogs.

The evolution of the Carolina Dog started 8,000 years ago when primitive people migrated across the Bering land bridge from Asia into North America. They brought a primitive form of dog along with them.

The Carolina breed was not much of a topic that was studied and written until the last century. The breed entered into the record of dogs breed in the 20th century.

The modern history of the Carolina Dog began in the late and early . A professor at Aiken Technical College in Aiken, South Carolina, named Dr. Pam Brisbin, went to a county dump near New Ellenton.

One day, she found a small puppy with no collar and took him home.  It was not so long when the Brisbin family long realized that Horace (the puppy’s new name) behaved differently from other dogs.

These dogs quickly spread to Northern China and Siberia from their homeland in Southern Asia. They almost certainly were crossed with the larger, more densely coated wolves of the north there, giving them greater ability to survive in the cold.

The Carolina Dogs have shy and suspicious behavior possibly because they haven’t been overly bred for domestication. They adapt well to a social group with other dogs and new people as they are pack dogs.

Carolina Dogs have very affectionate and loyal temperament. They form very close attachments to their owners with great loyalty. They do possess a prey-drive but are less likely to be aggressive.

The Carolina Dog is a pack animal that bonds tightly to its closest people and mates. He has an aloof or nervous personality and is very alert and is well-known for being reliable watchdogs.

Though an intelligent breed, Carolina is very difficult to teach and requires a skilled trainer to overcome their stubbornness. They have a natural instinct to please people.

So they require a gentle and consistent owner who is willing to dedicate a lot of time to the training. The dog will be able to learn every thing slowly but perfectly if taught with positive reinforcements and kindness.

Facts about the Carolina Dog Breed

Here are some of the facts about the Carolina Dog Breed that you might want to know about:

Health Issues that are seen in the Carolina breed

The Carolina Dog breed lives a life of 12 to 15 years. During this time, he suffers through various types of diseases and health issues. According to Easypetmd, here are some health issues that are commonly seen in :

Hip Dysplasia is one of the most serious genetically inherited disorders which is caused by malformation of the hip joint.

Cataract is lack of clearness in the eye lens which is commonly called opacity. Cataracts may block light from passing through the lens, hence it can have a substantial impact on a dog’s vision.

Elbow dysplasia is known as several closely related medical conditions which can impact the elbows of domestic dogs.

PRA is one of the leading causes of canine blindness. Progressive retinal atrophy is not only a single condition, but rather a collective term which is used to describe a number of very similar genetic defects of the retina.

Color of the Carolina Breed

If you are having the idea of owning a Carolina puppy, then you better make sure you have your house and garden puppy-proofed before you bring him home.

Electric wires and Cables should be properly managed and should be out of reach from the puppy.

Cost of a Carolina puppy

If you are willing to buy a Carolina puppy, make sure to separate a budget from $800 to $1000 depending on the breed’s quality.

Here are some of the dog breeds that are quite similar to the Carolina dog breed: