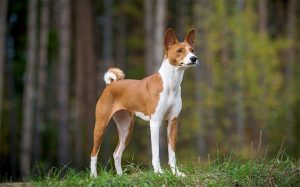 The Basenji, Africa’s Barkless dog was originally found in Congo. He uses both scent and slight to hunt. They are unique and charming pets best for owners who can meet their daily exercises and the challenge of training this canine.

Basenji are small sized dogs who stands 16-17 inches from the shoulder. They are known for their shiny short coat, with wrinkled forehead and expressive almond shaped eyes and tightly curled tail.

Basenji is one of the oldest breeds of dogs and perhaps that’s why it is not a barker. Unlike his cousin wolf, he can bark but usually barks only once and he is silent.

Basenji was discovered in the 19th by the Westerns in the Congo region in Africa. There they were bred to flush games on nets, to carry goods and to warn when approach of the dangerous animals.

In early times a good hunter Basenji was valued more than a wife by some tribes in Africa.

The first efforts to bring the Basenji to Europe failed because the imported dogs all died of diseases shortly after arrival. The import of this breed was first successful in 1930 both in England and the United States.

“The Basenji Club Of America” was formed a year before Kennel Club recognized this breed in 1943.

Basenjis are friendly and affectionate but they have a dominant temperament so they thinks that small children are below their pecking order. Sometimes small children can do things like pull their tails, jumping around them and make noise which may make Basenjis pretty aggressive.

The owner needs to supervise the and children at all times, not just Basenjis but all dogs for the safety of your child and dog. You need to train your child to approach well with Dogs and other pets in the home and set limits from both sides.

Basenji is willful and dominant, so to own a Basenji you need to be courageous and confident. Though Basenji’s don’t bark, they can howl like a wolf and this is by no means a silent breed.

Basenji’s are loving and affectionate towards their family but not to strangers. They tend to form a bond with their family and dislike if left alone. So, when leaving a Basenji alone, problem solving toys and a lot of bones need to be left around them for their entertainment.

Basenji breeders and owners often refer them as ‘ catlike’ as they are great in licking to groom and are quite. Along with this they seem to like climbing up onto high paces.

Basenji’s are known to be clever dogs, but not easy to train. Patience and confidence are needed when dealing with a Basenji.

Like other hounds, the Basenji is intelligent and independent and take time to decide whether to follow a command. Breeders recommend that training and socialization should be done as early as possible. There are chances of wary and lack of trust in people if not properly trained.

Interesting facts about Basenji are:

The Basenji, which has an average life span of 12 to 14 years suffers from some common health issues , such as:

Basenji’s comes in four colors, They are –

Which Dogs Similar To Basenji?

Dog breed similar to Basenji are: