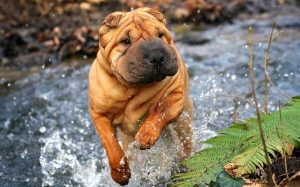 This wrinkled, blanket-like Chinese Shar-pei was originated in China as a guardian, herding, and hunting dog. Today they are kept as a companion that does well in an apartment as well. A novice owner can face difficulties handling this breed unless they are firm and consistent.

Its features are its distinct loose, wrinkled skin from head to tail, short but compact built that is covered with a rough, sandpaper-like coat. If you are thinking of getting a Shar-pei, know that you will be getting a smart, protective, and very loyal dog.

The temperament of Shar-pei is calm, confident, quiet but alert. Although it is quiet, it will keep an eye on any unusual activities in the surroundings and let you know by barking if there is something wrong. This breed does not bark often which is why it makes a great watchdog that only alerts its owner by barking when it’s necessary.

Since the Shar-pei forms a great attachment with its family and mainly one member that it sees as the master, leaving him alone for a long time can lead to separation anxiety. Do not keep your dog waiting at home for a long period although it will guard your house when you are away, too long can be bad for their brain.

The personality of the Chinese Shar-Pei is independent, devoted, and confident. They are sometimes referred as the stubborn dog that needs intensive training and lot of socialization. It is a very loyal dog that loves and is devoted to its family which is seen in its protective nature. You can trust this breed to guard your house against any intruders although training is a must, so they do not show unnecessary aggression to anyone.

The training of the Shar-Pei should be started as early as 6 weeks old. They are smart enough to soak up all the commands and tricks taught to them. Use the positive method of training as it is an effective method to train your dog at this age.

Yes, Shar-Pei does best with older kids that know to handle them and be gentle with them. With small kids or toddlers, it is better to raise them together. When it still is a puppy, introduce him to different kids so he does not grow up being unfriendly towards the kids when interacting with them.

Shar-pei is not an aggressive dog in general. They are loving and gentle towards the family if raised right. However, they are calm and friendly dogs unless provoked. Their aggression also depends on the kind of environment they are raised in. Sometimes, when their protective instinct kicks in, their aggression can be seen which is valid.

How Does Shar-Pei Behave Around Strangers?

Shar-Pei is not known to show aggression towards strangers unless they are some kind of threat to them. They are aloof with unfamiliar people, so you need to introduce them properly. Early socialization with different people will help them to be friendly and welcoming of people. An un-socialized Shar-Pei might bark at strangers and be aggressive towards them due to their protective instinct.