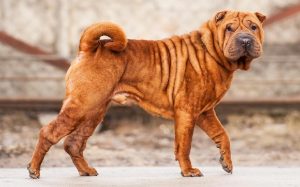 Chinese Shar-Pei is a medium-sized dog blue-black tongue, small sunken eyes, and wrinkled face. These breeds are affectionate, loyal and stubborn as well. They are also known as the “sand skin” due to their distinct and bristle-like coat.

Chinese Shar-Pei dogs are strong and independent companion famous for their loyalty and intelligence. They require regular exercises which often makes a hard to handle for an inexperie.

The Chinese Shar-Pei was originated in the southern provinces of China where it was valued as hunter and fighter. Some people believe that the Shar-Pei is an ancient breed which dates back to the Han dynasty around 200 B.C.

The dog’s population in the country practically wiped out with the rise of the people’s republic of China. A few Chinese Shar-Pei, however, were bred in Hongkong and Taiwan. Thanks to the man named Matgo law, in Hongkong, who helped the breed alive otherwise the Chinese Shar-Pei might have been extinct till now.

The breed got registered in the AKC in 1992 and rank 50th in the breed list. The Chinese Shar-Pei is gaining a lot of popularity nowadays with their lovable and affectionate personality.

These dogs love to play outdoor and thrive when gets a chance to run and fetch balls. Shar-Pei is independent dogs, which may not like to play all the time. However, children should be taught when to approach a dog. This breed may hurt toddlers unintentionally because they are huge and heavy. Always supervise your children when they’re with your pet.

The Chinese Shar-Pie is an alert dog which is extremely devoted to its family but aloof with people it doesn’t know. They thrive when they’re with the people they love. Shar-Pei is calm and confident with non-aggressive behavior.

As already discussed, the Chinese Shar-Pei is an independent streak with a strong-willed but are extremely protective when it comes to their territory and family. These dogs can be aggressive to other canines of the same sex.

They are quite dogs which usually don’t bark, but if they do, you must go and check what has caught his attention. Shar-Pei might seem gloomy and lazy but they are energetic dogs with a playful personality.

Shar-Pei doesn’t need much attention since they can entertain themselves with lots of chew toys and sun to bathe in. They can almost read your mind and will lie in bed for hours without moving their muscle.

Chinese Shar-Pei dogs are easy to train because they have high intelligence. They will simply avoid harsh training and will accept the consistent training. They are quick learners and will thrive on their training sessions.

Chinese like positive reinforcement training methods of rewards and treats. They are motivated and always follow the positive activities.

Some of the facts of Chinese Shar-Pei dogs are as follows:

Chinese Shar-Peis are prone to certain health conditions. Not all Shar-P will get any of these diseases but important to be aware of them:

Chinese Shar-Pei dogs can give birth to 4 to 6 puppies.

Some of the breeds similar to Chinese Shar-Pei dogs are as follows: