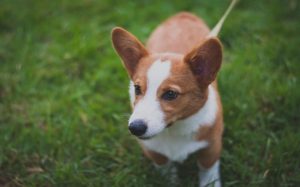 Corsengi is one of the many Basenji dog mixes whose popularity is slowly growing.

Basenji is from hunting background, whereas Welsh Corgi is from the herding background. The Corsengi got both of the traits from its parents and form its own unique traits. It got mixed temperament and personality from both of its parents.

The temperament of the Corsengi is friendly, curious, and smart. They got the herding instinct from its parent, Welsh Corgi and hunting instinct from Basenji. It is a very friendly dog and also active which makes them an excellent family companion.

They are also very alert about the activities in the surrounding which makes them an excellent watchdog that will warn you by barking if there is anything unusual going on.

Corsengi can have both herding and hunting instinct sometimes and start chasing small animals around. So keep them in a fenced area to avoid them from hurting an innocent animal. They need human company and if they do not get enough attention, they will get depressed and anxious. So, provide them with enough love and attention.

The personality of the Corsengi is friendly, smart, and energetic. They are also protective of their people that will not back off easily if they sense any harm. Corsengi is very brave and is not afraid to pick up a fight with a larger dog than them.

They are not good with other pets in the house unless they are raised together from a small age. So, it is not safe to bring a new pet home when Corsengi is already there.

Corsengi is not a very tough dog to train as long as you provide them with a firm and consistent training. They respond very well to positive reinforcement so reward them with delicious treats and lots of vocal praises. It will keep them motivated and focused on the training. Do not use harsh or force the hand on them as it will make them aggressive or scared.

Corsengi is a child-friendly dog that gets along with children very well. They are playful and fun to be around. Although they do not tolerate kids harsh behavior and might hurt them. So they do best with older children who are gentle with them. Small kids need to be guided and their interaction should be supervised properly.

How Does Corsengi Behave Around Strangers?

Corsengi is suspicious of strangers that do not trust them easily. They are wary of unfamiliar person and will bark at them if they see them approaching their property. So, early socialization with a variety of people is necessary to make them welcoming visitors at home.