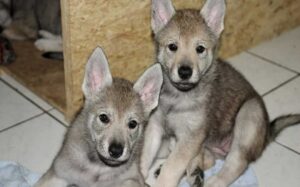 Czechoslovakian Vlcak is a large-sized dog breed with a powerful, active, and loyal temperament. It is not suited for any dog owners. Only an experienced dog owner can provide with the needs and requirements of this breed. It has boundless energy, so regular physical activities are recommended.

The Czechoslovakian Vlcak can give birth to 6-8 puppies at a time. Since it is a large-sized breed, the development process of its body is mind is slower compared to the small sized dog breeds.

The newborn Czechoslovakian Vlcak is a very fragile puppies as they cannot see, hear, and walk. Their needs are mostly fulfilled by the mother herself from nursing to cleaning. Make them a cozy place to live and so not separate them from the mother for a long period of time. The puppies are not able to generate their own body heat, so the bitch keeps them warm.

Make sure the mother is feeding her puppies in every two hours. The mother’s milk is rich in colostrum which protects the puppies from many fatal diseases. So, do not give them other formula unless very necessary.

The neonatal stage of the Czechoslovakian Vlcak puppies is from birth to 3 weeks old. The puppies are very vulnerable during this stage, so proper care is needed. Let the mother take care of her puppies while you make them a cozy place to stay. Do not keep the puppies away from the bitch in this stage as they might die of hypothermia.

The transitional stage is a beautiful period because you can see the Czechoslovakian Vlcak puppies opening their eyes for the first time between 14-16 days. The ear canal also opens and they are able to hear the sound of their mother and littermates for the first time. However, the vision is still blurry for the puppies for some time which will improve with time.

You can also witness the puppies forming their own vocabulary to communicate with the littermates by yelping, barking, and whining. By 25 days of their birth, you can see them taking their wobbly steps. They also now become more independent which means they do not rely on the mother for everything. They can pee and defecate on their own without their mother’s stimulation.

During the socialization period, the Czechoslovakian Vlcak puppy’s interaction with others increases. They learn to know their littermates and other human families by this age. The attachment that the puppy form in this stage remains for the lifetime. So, it is important that you be careful while introducing them to strangers. When the puppies are around 8-9 weeks, expose them to the outside world. Introduce them to different people and dogs.

Start giving them basic obedience training when they reach 8 weeks old. They are very quick at picking up new commands and trick at this age, so this is a perfect age to start training your dog. Keep the training session short but fun as the might get bored easily which will distract them easily.

Feed Czechoslovakian Vlcak high quality puppy food that contains all the nutritional needs required for them. They need 4 meals a day which helps them in their growth and development.

In the stage, it becomes one of the most challenging period for the owner. The Czechoslovakian Vlcak puppies are full of energy with lots of curiosity. Their baby teeth begins to be replaced by adult teeth which can be painful and itchy. To relief that, your puppy might start chewing random stuff and destroy them. Therefore, it is best if you invest in chewable toys for the puppies.

To utilize their energy, it is important that you give them plenty of activities to keep their mind occupied. If they destroy something or make any mistake, do not use any punishment against them. It is a delicate stage, so any trauma can affect the puppy for life. Be a gentle, calm, and confidant leader for your dog.

The adolescence stage of the Czechoslovakian Vlcak starts between 7-9 months. In this period, the female experienced her first heat where as the male starts showing interest in female. The testosterone level of the male starts to increase by 5-7 times in this period and gradually falls when they get around 18 months old. However they are still in the process of developing, so do not involve them in mating until they are fully grown.

Start advance training your Czechoslovakian Vlcak to keep up with their energy level. Involve them in different dog sports and agility. It will keep them physically strong and mentally stimulated.

Provide your dog with premium adult food based on its size and activities. A balanced diet will keep your Czechoslovakian Vlcak in a healthy state.

The average cost of the DHPP vaccines according to the American Kennel Club is between $75-$100. The cost for rabies vaccine is between $15-$20.