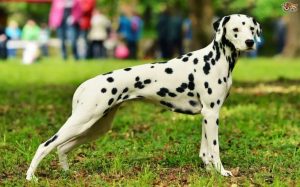 With extremely slim, athletic body, born to run personality and unique spots, the dalmatian is one of the distinctive dogs on the Planet.

The Dalmatian is medium-large dogs with short, fine coat velvety to the touch and black flopping ears that show their alertness personality.

The Dalmatian’s origin is still a mystery, but many of them believed that they were originated in the central European region of Dalmatia as their name itself derives them of that region.

The unique spotted dog was bred to use in a variety of works, such as bird and hunting dog, a retriever, a trail hound; however, they were originally known as a coach dog. And there is even archeological evidence such as sketches and engravings which represent a dog similar to Dalmatian working with Egyptian Chariots.

Dalmatian can be a great playmate for children. With high energy and enthusiasm for games, both Dalamtion and your child will have an amazing time tiring each other out. But his rambunctious nature may sometimes be overwhelming to young children and may knock down them. So special supervision is needed while interacting between small children and Dalmatian.

The Dalmatians are high energy dogs with an endless capacity for exercise. They love to be around people and are known to be attention seeker and always eager to please their owner, which makes them easy to train.

Dalmatians are smart and alert dogs who show interest in everything that goes’s around and that’s what makes them excellent watchdogs too.

The Dalmatians are known to be active dogs but in spite of they have hyperactivity and destructive behavior like chewing and excessive barking. They are likely to be nervous and end up to be aggressive, but proper socialization and training can help build your Dalmatian’s confidence the risk of his behavioral issue.

Training a Dalmatian is not difficult for a confident and determined owner. They tend to form a strong bond with their owner which can be beneficial for you.

Training a Dalmatian should always involve positive reinforce, praise and lots of treats. Avoid harsh training or it will result in fearfulness as they tend to start out on the shy side.

The average life expectancy of a Dalmatian is 11-13 years. Some defects and disorders found in Dalmatians are as follows:

To get a healthy Dalmatian in the future, never buy one from an irresponsible breeder, puppy mill, or pet store. Find a reputable breeder who tests her breeding dogs to make sure they are free from genetic diseases and will show you health clearance.

Which Dogs Are Similar to Dalmatian?

Visit Doglime For More Dog Breed Information and their behavior.