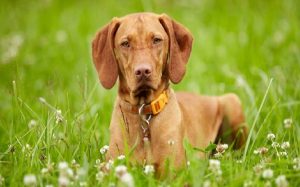 The Vizsla is a medium-sized red-coated gun dog. They were bred for the purpose of pointing and retrieving. Although they are a hunting dog, they also make a great family companion. They are very attached to their family and are affectionate towards them.

The Vizsla is a short-coated dog that is smooth and dense. They have a lean but a muscular body, strong neck that is slightly longer. Their ears are thin and silky that hangs close to the cheeks. The tail is normally docked to 2/3 length. The overall appearance is strong that is best for working and hunting dog.

The origin of the Vizsla was in Hungary descended from hunting dogs that were used by the Magyars. They settled in Hungary more than a thousand years ago. They were bred as to point and also to retrieve. With its keen sense of smell, it would track, with good eyesight it would point. It was very popular among the Hungarian nobility.

One interesting history of the Vizsla is that it worked with the Falcons. They would point and flush the birds to the Falcons and the Falcons would dive and bring it to the people.

In 1960, the American Kennel Club recognized the Vizsla. It is registered under Sporting Group.

Is the Vizsla Child-Friendly?

The Vizsla is a child-friendly and tolerant dog which love and adores kids and can be great playmates. As a hunting dog, it has high energy, so its energy can be overwhelming for small kids.

If it is to be kept in a house with small children, close supervision is necessary. Teach your children to approach and behave around dogs.

Temperament: The temperament of the Vizsla is gentle but energetic. They are very gentle and loving towards the family. Due to their high energy, they make a great family companion. It likes to be involved in regular activities of the family and help them with the household works.

Behavior: Vizsla is a very active dog and they need to be exercised regularly. If they do not get the required exercise, they can be bored and destructive. They can start chewing things, and barking loudly that will only disturb your neighbor.

Personality: The personality of the Vizsla is friendly and affectionate. They love to be around people and are friendly towards them. They are suspicious of strangers but if introduced properly, they are welcoming of them. Due to their high hunting instinct, small pets are not much suitable for them but they do well with their sized canine if raised together.

Training Vizsla is not a hard task to do as it is a smart and intelligent dog. However, they are independent and can be stubborn sometimes. So, a firm and consistent leadership should be established.

Use positive reinforcement to motivate them and encourage them. Do not be harsh on your Vizsla, as it might get scared and even aggressive. Be gentle and teach them patiently.

The average life span of the Vizsla is between 12-14 years. During these years, it can face some possible canine diseases which are explained below:

According to the American Kennel Club, the Vizsla comes in the following colors and markings: