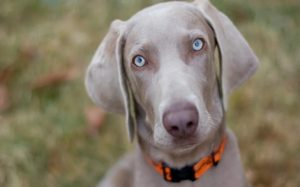 The Weimaraner is a medium-sized hunting dog with an athletic and muscular body built. It is also known by the names like Weimar Pointer, Weimaraner Vorstehhund, the Greydog, and the Grey Ghost.

Weimaraner are active dogs that are not suited for apartment life. They need a house in the countryside with a big yard. They need regular exercise, so an active owner who loves to hike, run, or go for hunting is best suited for them.

The Weimaraner is a strong and muscular dog that has high stamina and speed. Their head is moderately long with ears that long, set high and hang on the side of the jaws. Their front legs are strong, muscular and straight. The coat is short, smooth and sleek. However, long coat is not acceptable.

The Weimaraner was developed around the 1800s in Germany. It is believed that this breed was developed by mixing several breeds like the Bloodhound, German Shorthaired Pointer, English Pointer, and Blue Great Dane.

They were used by the sportsman to hunt big games like deer, mountain lion, bear, and wolves. They were also used for pointing and retrieving birds and waterfowl.

The Weimaraner gets along with children well as they are loving and fond of children. They love kid’s company and enjoy playing with them.

As a hunting dog, they are very active and energetic, which can be too much for small children. Therefore, if you consider keeping Weimaraner in a house with small children, close supervision is needed.

Temperament: The Weimaraner has a friendly temperament which is a very active dog that does well in an active family as a companion. They are loving of their people and are very loyal and devoted to them. they form a strong bond with one particular member of the family and see him/her as its master.

Behavior: The Weimaraner, as being a hunting dog, will chase any small animals they see running. Therefore, this behavior can get you into trouble as they might chase and hurt your neighbor pets. So, keep them in a well-fenced yard and on a leash while taking out.

Personality: The Weimaraner has a gentle, loving, and active personality. They love to live indoors with their family and does not do well outside in a kennel. They tend to bark at strangers and any unusual activities in the surrounding. Therefore, they make a great watchdog.

The Weimaraner can be a difficult dog to train as they are stubborn and mischievous. A lot of patients is required to train them. First, you need to establish strong leadership upon them. They need a consistent leader who can train them with firmness.

Use positive methods of training to encourage and motivate them. Reward them with delicious treats and a lot of vocal praises.

The Weimaraner is usually a healthy breed with a life expectancy of 10-13 years. In these years, they can face the following possible canine health problems:

The Weimaraner comes in following colors according to American Kennel Club: