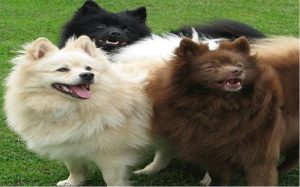 German Spitz dogs breed can be confused with Pomeranian because in fact many people still think that any white and a small dog is a Pomeranian. Most of the dogs that you see around are German Spitzes and there are many varieties of Spitzes.

Like any Spitz breed, German Spitz can be a barker if left to his own, but after training, it can learn when it is okay to bark and when it is not. It generally gets along with children, dogs, and cats but its high prey drive can make it dangerous to small pets or birds.

The German Spitz is believed to be the direct descendant of various Nordic herding dogs such as Samoyed and the Lapphund. They came to Europe with the Vikings. In fact, it is believed that there is German literature that refers to Spitz somewhere around 1450.

The breed’s popularity decreased after World War I but was revived in Europe in the 1970s. Today German Spitzes are famous in Germany, Great Britain, and Australia. The United Kennel Club registered the German Spitz in 2006.

Yes, German Spitz dogs are they are happy, intelligent, and friendly dogs. They don’t show any signs of nervousness or aggression. They are very active and alert so they can play and chase the children in the yard.

Teach your child how to approach Spitz dogs. Never let the child pull the tail or ear of dogs, this makes the dogs angry and can even bite the kids. So proper supervision is necessary with children.

German Spitz dogs behave in a funny manner and is a lively dog that can be independent. It is smart and many owners describe it as having a sense of humor. They are a perfect family dog, they love to be in the company of their human counterparts. This is an intelligent breed that can be easy to train.

The temperament of the German Spitz dog is affected by training and socialization. Training should be given at the early stages so they can behave properly with children. Early socialization includes exposure to people, sights, and experiences.

The personality of the German Spitz dog is described by their high prey drive capacity because they are prone to attack smaller pets including birds, ferrets, cats. They can coexist with cats when raised with them. They love to participate in training such as chasing the ball.

German Spitz is a very playful breed that is alert and intelligent. They are obedient and love to please their family members. This makes the training process a little easy. The owner just has to be consistent and make good training programs and after a few months, you have a perfectly trained dog in your house.

The only problem in training your German Spitz dog is that it can be stubborn but you have to start the training early. Proper training will help dog to develop good habits in your dog. You have to keep in mind that a crate should be a safe place for your pet and that should not be given as punishment.

Some of the facts related to German Spitz dogs are as follows:

German Spitz dogs are healthy but like other breeds that are prone to certain health issues. Some of the health conditions are given below:

German Spitz dogs are found in the following different colors:

Which dog breeds are they similar to?

Some of the breeds similar to German Spitz dogs are as follows: