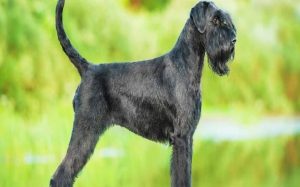 The Giant Schnauzer dog is the largest breed of the three Schnauzer that is, Miniature, Standard, and Giant. They are a working dog with high energy. Because of his giant body, Giant Schnauzer gives the impression of a powerful and tough dog. They are a strong muscular dog which is developed for a high level of activities.

Giant Schnauzer coat is long, harsh and dense with a soft underlayer. The outer layer is neither flat nor smooth. Giant Schnauzer body is muscular and they have a harsh beard and eyebrow giving them sagacious expression. The eye looks dreamy with a twinkle and it is brown in color. Their tail is short and thick.

The Giant Schnauzer was originated in the mid-1800s in the Bavarian Alps. They were originally bred to drive cattle to the market from the farm. Giant Schnauzer are the mixed breed of a rough-haired sheepdog and black Great Danes. They are also believed to be closely related to Bouvier des Flandres

When Bouvier des Flandres was no longer used to drive livestock in the farm, they were used by butchers as a guard dog. In America, Giant Schnauzer was famous as a show dog, obedience champion and very courageous guardian family dog.

Giant Schnauzer is a big dog and it is not recommended in a house with toddlers and small children. This dog should not be brought in a house with children below 10 or 12 years.

Temperament: The Giant Schnauzer is of alert temperament. They are easy going but some can be high strung. As a working dog, he has a high activity level and work all day. They are best suited for an active owner who do alot of physical activities.

Behavior: The Giant Schnauzer a loyal and loving dog with his family but they show aggressive behavior around strangers and other pets. Therefore, small cats, dog, and same-sex dogs should be kept away from him. They should be kept busy and active. Otherwise, you get to see his destructive behavior when bored.

Personality: Giant Schnauzer has a spirited personality who loves to work and be engaged in something. They are alert and makes a great guard dog who does not let anyone come near their territory. They tends to bark if they see any suspicious activity going around.

Giant Schnauzer training varies from dog to dog. They should be trained from an early age so that they grow up to be obedient dog. A not so well-trained Giant Schnauzer can be a challenging dog at home.

Establish a firm leadership, full consistency and use positive methods of training from an early age. Always be gentle and reward them with treats, words praise and light pat o their back. This will motivate and encourage your dog to be a well-mannered pet.

The average life expectancy of Giant Schnauzer dog is between 10-12 years. They are potential for suffering from a genetic health problem. Due to their large size, they are prone to different canine diseases like:

Giant Schnauzer comes in the following colors with no marking on the coat:

Cost: The average cost of a Giant Schnauzer puppy is from $400 to all the way up to $2600. The price varies from the type of breeders.