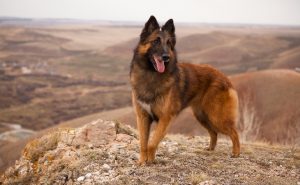 The combination of beauty and brain, the Belgian Tervuren are fun loving, intelligent working dogs. Their good looks and elegant coat will make you mesmerize and eager to have one.

They are a perfect addition in the family and very protective towards their family. Tervuren are active dogs and loves being busy which is why they are suitable for owners who are active and don’t want a couch potato!

The Belgian Tervuren is one of the four Belgian Sheepdogs. Tervuren was named after the Belgian village of Tervuren, where rural farmers were in great need of herding and guarding dogs.

The Belgian Tervuren dates back in the 19th century and in the early years of its development, they were used as to guard and protect the herd. During the period of World War I and II, the breed almost became extinct were a small group of breeders continued protecting them.

In 1959, the American Kennel Club declared them as a separate breed and the American Belgian Tervuren Club was formed in the year 1960.

Tervuren is gentle and protective towards children especially if they are raised with them. Tervuren should be well socialized at an early age to avoid behaviors such as herding. They make a good play-mate to kids who are active and can play from sun up to sundown. Belgian Tervuren loves being busy, going on a long walk or chasing a frisbee.

You should always supervise your kids and Tervs while playing because of the herding instincts they might try to herd and nip the children.

Belgian Tervurens are loyal, obedient and active working dogs. Like every herding dogs, they are also workaholics. Tervs need constant activity and training. They are intelligent watchdogs which means they don’t bark or attack without a reason. Tervs are very protective of their family and territory.

At the other hand, your Terv is a devoted and affectionate dog. They are working dogs, which does not mean they are back yard dogs! Belgian Tervuren needs enough time and affection from you to be nice and gentle dogs. They are suitable for families who can love as well as respect them.

Chewing, barking and separation anxiety is common in the breed. They will become destructive when left alone or bored. Having a Belgian Tervuren means having an active lifestyle! So, get ready to tie your ponytail!

Belgian Tervurense highly trainable and will thrive on advanced obedience classes, agility training, and tricks. Though sometimes, they are hard-headed and willful. Treats and positive reinforcements can avoid such behaviors and makes training easy.

Even though they are highly trainable, they are not for the first time owners, since they are highly intelligent and manipulative. They will easily develop the dominant personality who does not know how to remain consistent with training. Maintaining discipline is the key object to avoid behaviors such as stubbornness.

The Belgian Tervuren is generally a healthy dog breed. However, like in every breed, there are certain common health issues Tervs are prone to. It is important to be aware of such problems and react timeously.

Hip And Elbow Dysplasia: This health issue is common in medium and large-sized dog breeds. It is an inherited disease in which the thigh bone doesn’t fit well in the socket of the hip joint. Similarly, elbow dysplasia is known to be caused by the three bones that comprise the elbow, growing on different rates.

Epilepsy: Belgian Tervuren can suffer from epilepsy which is a disorder that causes mild seizures. It is a hereditary disease which can also be triggered by metabolic disorders, infectious disease. Epilepsy can be controlled with quick and regular medication.

Progressive Retinal Atrophy (PRA): PRA is caused by the dying of rod cells in the retina. This is an eye disorder which causes blindness from the loss of photoreceptors from the eye.

The Belgian Tervuren gives birth to an average of 6-10 litter at a time. If you are planning to own a Tervuren, then it will cost you between $1200-$1500. However, always buy a puppy from a reputable breeder and meet at least one of the parents of the puppy to have a healthy furry new pet.

Which Dog Breeds Are They Similar To?

To sum up, owning a Belgian Tervuren is always fun and a wonderful addition in the house. However, behavior and temperament is based on the raising and training.