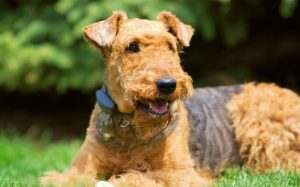 The Irish terrier is one of the many breeds of Ireland and is known to one of the oldest breeds.

They are wonderful family companion and its not surprising that people go crazy for it because of its loveable personality.

Origin And History Of Irish Terrier

The Irish Setter belongs to Ireland and is considered the only terrier with an all-red color. They are describes as ” the poor man’s sentinel, farmers’ friend, and the gnetleman’s favorite.”

It was first appeared in a dog show in Glassglow in 1875 under the name Irish Terrier.

The Early Irish Terrier came in several colors such as black and tan, grey, and brindle. But by the end of 19th century Irish Setter started to disappear in those colors and were found only in solid-red color.

Soon the Irish Terrier started gaining popularity in the United States. A class for this breed at the Westminster Kennel Club show in 1881 was established. And the Irish Terrier Club of America was founded in 1896.

The Irish terriers are kind and gentle with children and makes great playmates as well, especially if raised together. Their large size and high energy level makes them great companions for kids of all age group. Yet they both should be supervised especially with small children.

To make the best with your children, supervise them from an early age and teach them not to be rough or mouthy. And along with that, it is also important to teach your child not to pull the dog’s tail or ears or hit them.

The Irish Terrier was bred to be dog and hunter as well. Their temperament is spirited, alert, adaptable and good-natured. They are even curious and . They love people and to be around them. They are not aggressive and even friendly with strangers.

The Irish Terriers holds an independent, smart and strong-willed personlaity. They require mental challenges in the form of training. They love doing physical exercise. They are evry loving and playing breeds.

These active dogs are full of life but not hyperactive. They are naturally protective of their property and their people which means they are excellent watchdogs and will bark to let you know of visitors and intruders.

They are usually not aggressive but tend to be a little aggressive when they are around other dogs.

The Irish Terrier are very intelligent dogs and always feels pleasure to please its owners which in short means they are easy to train dogs. They thoroughly enjoy the one-to-one attention they receive during th session.

The key to successfully training an Irish Terrier is to keep training short, fun and interesting and try to avoid repetition. It’s better to keep lots of shorter training sessions than few long session, as short training sessions will keep them more focused on what they are being asked to do.

Facts about Irish Setter are:

The Irish Terrier is a healthy dog breed and doesn’t seem to suffer from any serious problems. But there is one condition that seems to affect them although it is quite rare is as follows:

The Irish Terrier is protective so they need to train from their puppy age onwards to make them their best. The Irish Terrier puppies are boisterous and full of life so it’s essential to make your homes and gardens puppy-proofed well in advance of their arrival.

If you are adopting an Iring Terrier pup, then adopt it from a decent breeder, because a responsible breeder would have well socialized their puppies which always leads to more outgoing, confident and friendly dogs right from the word go.

The Irish Terrier usually found in three color patterns, such as:

Dogs Similar To Irish terrier are: