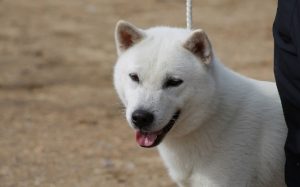 Kishu Ken or even called as Kishu Inu is Japanese medium-sized dog breed. Kishus are lovable and self-confident demeanor. They are ferocious and brave and never afraid to take a step forward.

If you fulfill their physical requirements then this breed may be the right choice for you. Kishu Kens are easy-going breed with forgiving nature and also are excellent watchdogs.

Kishu Ken is believed to be 3000 years old dog breed. They were developed in Kyushu island of Japan. They bred to hunt wild boar, wolf, bear. According to the Japanese legend, the Kishu Ken is the descendant of wolves.

The Kishu Ken was officially recognized in 1934, and in the same year, the breed was designated a Living Natural Monument in Japan and was protected by the government.

Kishu Kens are wonderful with children. They are playful, gentle and protective with children. Kishu Ken love playing outdoors when they’re offered flyball, Frisbee or anything which includes running.

Kishu Ken might tend to dominate and lead the children which can be challenging for you and your kids. Always supervise them while playing as they may forget and become rough players.

Kishu Ken is a loyal breed who can risk their lives to save their loved ones when needed. They are the human pack kind of dogs. Kishu Ken love spending time with their family and are happy when offered a job to do.

Kishu Inu doesn’t like spending time alone. They might develop separation anxiety which leads to aggression and destruction. Kishu Ken have a shy and timid personality with new people and new environment. This breed needs to be socialized at an early age to avoid such behaviors.

Kishu Kens are quite docile and does not bark a lot. They have a very strong sense of smell as due to their hunting instincts they have high prey drive. Small animals like guinea pigs, hamsters, rabbits, and rats should not be introduced with Kishu Ken.

Kishu Ken as being a hunting dog might be independent thinkers sometimes. Luckily, they are not so stubborn while training. Kishu Ken will respond nicely and even more when followed by treats or its favorite toys.

Kishu Ken should be socialized from an early age to get along with other pets too. Enrolling to puppy school and obedience classes would help you. Kishu Ken is always eager to learn new things.

Kishu Ken is a generally healthy breed. But like any other breed, they are known to suffer from common health issues like.

Entropion: This is a genetic condition that affects the eyelid and could cause complete loss of vision.

Hyperthyroidism: This is a common disorder of the endocrine system which exhibits itself cold intolerance, infertility, and weight gain.

How Much Do Kishu Ken Puppy Cost?

The price of the Kishu Ken puppy is between $900 – $1600 depending on the quality of the breed as well as the breeders.

The Kishu Ken gives birth to 2-5 puppies at a time and the average litter size is 3 puppies.

Weight: The Kishu Ken should weigh up to 30-60 pounds.

Which Breeds Are Kishu Ken Similar To?

To wrap up, Kishu Ken is the perfect breed for a family companion. Since they are loyal, affectionate and great watchdogs.