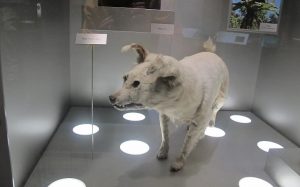 Kuri is an extinct dog breed that was kept by the Maori people of New Zealand from the 13th to 19th centuries. These medium-sized dogs were multi-purpose as the indigenous Polynesian or Maori people used them as hunt dogs, guards, and companions.

The origin of the Kuri dogs dates back to the 13th century when the Polynesian ancestors of the Maori brought them to New Zealand. They brought this breed along with them during their migration from East Polynesia.

During that time, the Kuri was the only mammal larger than a rat which the Maori people kept as a domestic animal. Besides being kept as a pet dog, these dogs were also raised for their fur and leather. Moreover, the Maoris made belts, caps, weapon covers, and other leather products using these dogs’ skin.

Hunters used the Kuri dogs for hunting birds as they could sense them using their scenting abilities. Not only that, but they were also used for their meat which was considered a delicious delicacy. A famous ancient British explorer James Cook tasted this breed’s meat on his journey in 1769. He claimes that the meat was as tasty as a lamb’s meat.

How Did Kuri Dogs Become Extinct?

The Kuri Dogs became extinct in the early 19th century because of excessive crossbreeding with other breeds brought from Europe. At the beginning of the 1800s, the Maori started bringing other European dogs. After that, they began mixing the Kuri dogs and the European breeds in order to achieve a new breed. They slowly became rare due to the crossing and they eventually vanished soon.

The Kuri had a dull and lazy temperament as described by the ancient Maori people. They were slow, had very less energy and possessed a low working drive. Like Chihuahua and Chow Chow, these dogs had an affectionate personality as they bonded with their people very quickly. However, they behaved unfriendly and suspicious with strangers.

Was Kuri a Child-Friendly Breed?

Yes, Kuri was a child-friendly breed because of its affectionate nature. As they were lazy and dull, they enjoyed sleeping next to the children. It acted very protectively of the kids once they formed a strong bonding together. But, the people had to make sure that the kids and the Kuri dogs were introduced from an early age. Otherwise, the dogs wouldn’t be friendly with the children.

The Kuri Dogs were found in the following colors:

On average, a mother Kuri dog gave birth to 5-8 puppies at a time.