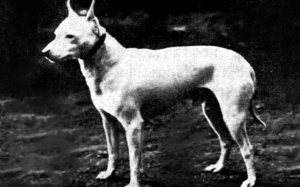 The English White Terrier is an extinct Terrier breed of dogs that existed in Britain in the 19th century. They were small-to-medium in size and were used as show dogs.

The origin of the English White Terrier dates back to the 19th century in Britain. They resulted from the efforts of some of the dog fanciers who wanted to develop a small pricked-ear version of the white working terrier. Moreover, some theories claim that this breed originated unintentionally while trying to breed the Manchester Terriers.

People also believe that the English White Terriers came into existence by crossing the Fox Terriers with Whippets or Italian Greyhounds. As the breed started gaining a lot of popularity in the 19th century, The Kennel Club officially recognized it in 1874.

Though the English White Terriers were first bred for hunting purposes, the British people soon discovered that these dogs didn’t for the job properly. They couldn’t even do good at hunting rodents and other small rodents. Therefore, they started using these dogs as show dogs instead of hunting dogs.

How Did the English White Terrier Go Extinct?

The English White Terrier became extinct in the early 20th century because of the health problems the breed possessed. Most of the dogs were using an inbreeding method which caused them to born deaf by birth. Not only deafness, but they also had other health problems like nervousness which was initially declining the breed’s number.

Despite the fact that the English White Terriers had genetic deafness through inbreeding, people kept on breeding them. This led to genetically unhealthy dogs due to which people didn’t consider owning them much. Moreover, farmers also started using other working dogs over them. Hence, they gradually became rare and went extinct in the 1900s.

The English White Terriers had loyal, affectionate, and loving temperament. Although they killed rats and other rodents, some of these dogs also had a gentle personality. They were calm and relaxed dogs in comparison to other Terrier breeds. Some of them also experienced nervousness and short tempers due to unhealthy inbreeding.

As the English White Terriers lacked intelligence, they were difficult to train. However, this could have also been because of their deafness that they couldn’t understand the commands. Most of them were kind of lazy and preferred sleeping or being pet rather than working outdoors.

Yes, the English White Terrier was a child-friendly breed because of its calm and affectionate nature. They loved being laying with children and being pet on their lap. But as most of them were deaf, they would act strangely because they wouldn’t understand be listen to anything. Hence, they would be perfect companions for kids of all ages.

The English White Terrier was found in only white color which can be known by the breed’s name itself.

On average, a mother English White Terrier gave birth to 3-5 puppies at a time.

Check out Doglime for more information on other extinct dog breeds.