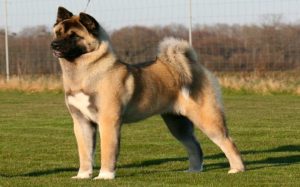 Akita dog breed is a wonderful combination of dignity with good nature, alert, courage, docility. They are known for many other names such as Akita Inu, Akita Chen, and Japanese Akita dog.

Sometimes its quite hard to find out which is American and which Japanese Akita. But in this both types of Akita’s there is something that is different such as their shape, size, personality, and their coat color.

Akitas are Japanese bear dog and one of Seven Breeds designated as a National Monument of Japan. They were bred as a versatile hunting dog in the rugged mountains of Northern Japan.

In early times Akita was referred to simply as “Snow Country Dogs”, as they were originated from the snowy mountain region of Japan. And they were bred to hunt boar, elk, and the small Yezo bear. Presently there is a museum in Odate devoting Akita dog breed.

Is Akita good for kids?

Like other dogs, Akita also needs to be trained to behave gently with children. They are independent breed, but if they are well trained and socialized properly, they can have empathy toward your children and will love to play with them.

It is strongly recommended that your child should always be supervised when interacting with Akita, to keep both the child and dog safe.

Behavior, Temperament and Personality Of Akita

Akita is a breed who are very powerful and independent, they are fearless and do not back down when it comes to a challenge. This breed are very loyal towards their family and about its loyalty, you must have heard the story of Hachiko dog, who was an Akita dog breed.

This dog breed is not so friendly with strangers, but yes they are not extremely aggressive towards them. This breed likes to spend most of their time with family but as they independent dogs, so they can stay alone at home for some time.

Talking about their temperament, Akita’s are very much territorial dogs and they don’t like strangers coming to their territory. They might get aggressive sometimes but a great dog to keep as a pet at home.

Akita dog breed is not recommended for first-time dog owners because they are very dominant. So, it will be good for them when they are 7-9 weeks old then their training should be started so that when they will grow old they will learn to obey your things. And from the same time teach them to socialize, because Akita Dog breeds are very intolerant towards other dogs.

One of the easiest aspects of training an Akita is usually housebreaking the dog. Akita’s are very good dogs about alerting their owners to their need when it comes to having to go to the bathroom.

As long as the owner is responsive and attentive to their Akita’s needs, the housebreaking process should be a relatively simple undertaking. Learn the best techniques and the specialized knowledge on how to train your Akita properly and as a result, they will be the best pet for you.

In Akita the mostly seen health problems are –

Akita is found in multiple colors, which are –

An Akita Puppy is a pure mix of cuteness and joy. If you are willing to have its puppy then try looking at breeders who have a good reputation in your locality.

A good breeder will provide you information about purebred Akita puppies and even pleasure to show you around where they breed their dogs. Akita Puppies can range in price between $750 – $2000.

The dogs that are similar to Akita are: