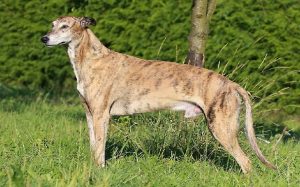 The Magyar Agar is a large-sized dog that is commonly known as Hungarian Agar or a Hungarian Grayhound. It is a loving and gentle dog breed that is best suited for an active family who can provide it with regular physical as well as mental activities.

Although it is bred as a hunting dog, it is also kept as companion dog due to their gentle, docile, and loving nature. They are suited in an apartment too as long as they are taken out for a walk or run regularly.

So, only own this dog breed if you can provide it with regular exercise and dog activities.

The Magyar Agar was originated in Hungary that was used as a hunting dog. It was used to hunt through sight and were excellent at their job. It is believed that the Magyar Agar used to travel with Magyars, who were the nomadic tribes of Hungary.

There were two versions of the Magyar Agar: big and small where big were used by nobility and smaller were used in farms to catch hare and deer. Although the smaller Magyar Agar is now extinct.

Temperament: The temperament of the Magyar Agar is friendly, gentle, and affectionate. Although they were bred as a hunting dog, they do best as a family companion as well. They are loving and affectionate that thrives in the human company and attention.

Behavior: Magyar Agar is an energetic breed that needs regular physical and mental stimulation. So, take them out for running or dogs sports daily to keep them happy and healthy. They get anxious and depressed if they do not find any job to do.

Training Magyar Agar is not a hard job to do as they are eager to please their owner. They are smart and tend to catch on new commands and instruction quickly.

Reward them with delicious treats and lots of vocal praises as they tend to respond to positive methods of training well. Start from basic obedience training and slowly move to advance training.

Yes, Magyar Agar is friendly with children. They are loving and gentle towards them that is also tolerant of their harsh behavior. They are playful with them which makes them a great playmate for kids.

Small kids need to be taught to behave around dogs and be gentle with them. Supervise their interaction as to avoid any kind of harsh behavior from either party.

Magyar Agar is generally a healthy breed that can face some canine health problems during their lifetime.

The Magyar Agar comes in the following colors combination:

Height: The average height of the Magyar Agar is between 24-27 inches.

Weight: The average weight of the Magyar Agar is between 49-68 pounds.