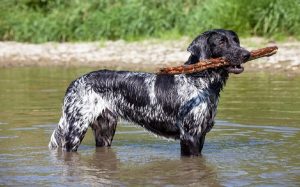 Although the name Large Munsterlander sounds little stranger, it is a beautiful breed with medium length, silky, beautiful coat. It is a very talented hunter but is very gentle with its family. So, it is one of the best breeds if you are looking for both hunting and companion dog.

The Large Munsterlander was originated in the Munster, Germany. It was bred as a versatile hunting dog that used to hunt both on land and water. Its ancestor was the German Longhaired Pointer that was crossed with various Spaniel.

At the time of World War II, this breed nearly got extinct but it was revived after the war. In 1966, it was brought in the United States by Kurt von Kleist.

Temperament: The temperament of the Large Munsterlander is docile, cheerful, and loving. They make an excellent family companion due to their friendly and gentle nature. They form a strong bond with its people and bond closest with its master.

Behavior: The Large Munsterlander is happy when they have a job to do and if they are not given any activities to do, they become destructive. They also have a high instinct to carry things in their mouth as a retriever. They will pick up the fallen stuff and you can rain them to clean the house as well!

Personality: The personality of the Large Munsterlander is a friendly, independent, and intelligent. They are suspicious of strangers and will bark to warn their owner at their presence but they are not aggressive. So, they also make a good watchdog for a family.

Training Large Munsterlander is not for a novice owner as it needs an experienced leader who knows its temperament. It is a smart dog that is not hard to train for an experienced master. Do not repeat the same stuff and challenge their mind with a variety of tricks and commands.

Use positive reinforcement of training as the source of motivation and encouragement. Do not be harsh on them even if they make some mistakes. Teach them gently and with firmness.

Large Munsterlander gets along with kids very well, so they are suitable at homes with kids. They are playful and energetic that makes them excellent playmates for children.

Although they have a friendly nature around kids, their interaction should be supervised so there is no harsh behavior from either party.

The Large Munsterlander comes in the following color combination:

Cost: The average cost of the Large Munsterlander puppy is between $400-$500 USD.

Height: The average height of the Large Munsterlanderb is between 23-25.5 inches.

Weight: The average weight of the Large Munsterlander is between 50-70 pounds.