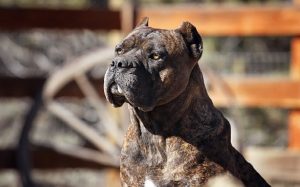 The Cane Corso is a breed from Italy which are powerful and muscular working dogs bred to protect properties and hunt big game like wild boar. Their body is big rather than tall with a big head, medium-sized, almond-shaped eyes. Cane Corso ears are naturally dropped, while some breeders crop them in an equilateral triangle shaped ears.

Cane Corso is not for a first-time dog owner. The one who owns this breed should be an experienced dog owner, who knows his ways with dogs. They have a fierce, straight forward looks that most owners do not like, so this dog is not for someone who is looking for a sweet and adorable dog.

Cane Corso is originated in Italy which falls into the subcategory of a working group, named as Molossus dogs, or Mollosers. Their ancestor was from Greek Island and Italy’s legions that covered Greek Island brought Mollosers back to Italy and bred them to a native Italian breed. The early Cane Corsos were big and more ponderous than today’s breed.

Cane Corsos were originally bred as watchdogs, guard dogs, and hunting dogs. They are rare breed at that time and were at the verge of extinction. However, Cone Corso’s fancier began to reestablish this breed in more numbers in the 1980s.

Cone Corso was first imported in America in 1988 and the American Kennel Club recognized this breed and registered them under the working group in 2010.

They should be kept on a leash while interacting with other children and should be supervised. Younger and older children should be taught to approach him.

Behavior: Cane Corsos are calm and quiet most of the time. They only bark and warn their master when they see something suspicious and something strange going on in the surrounding. They love spending time with their family and giving him little attention can lead to destructive and aggressive behavior.

Temperament: Cane Corso has a fearless temperament as they have the natural instinct to be a guard dog. They are highly alert, confident and very protective of their territorial.

Personality: Cane Corsos have a highly devoted, loyal, affectionate personality. They love their people family and are very much eager to please them. However, they hate strangers and do not want to be nurtured and touched by them. The only affection they crave is from their family members, not from some unfamiliar person.

The Cane Corso is moderately trainable. They are intelligent, devoted and are eager to please their master, so training is quite easy as long as you provide consistent training. Don’t be harsh on them, as they become defensive and aggressive. Be gentle, patient and give him a lot of vocal praises and show affection with a gentle pat on his back.

Cane Corso is mildly aggressive with other dogs, especially with same-sex dogs. Therefore, early socialization is needed to avoid his aggressive behavior around other pets. Put a leash on him while taking him out for a walk.

Cane Corso is generally healthy but we cannot guarantee that he will not suffer from any kind of diseases in his life expectancy of 9-12 years. As a large and muscular dog, he might have joints and bone problems. Hip dysplasia is common in Cane Corso as it is genetic.

Proper nutrition and the right amount of food can prevent obesity which is the main cause of joints problem. Take your Cane Corso to your veterinarian from time to time to check on his health condition.

Cane Corso coat is short and double. Although their coat is short, it is harsh and thick to be waterproof. They have a thick undercoat that keeps them warm in winter. Cane Corso sheds little and only need a few time grooming a month.

They come in two markings: black mask and a gray mask.

The cost of a Cane Corso puppy on average ranges from $900- $2000. The price varies with the dogs quality that comes from superior ancestors, usually starting from $2000 to as high as $8000 USD.

Visit Doglime for more information about dog breeds and behavior.