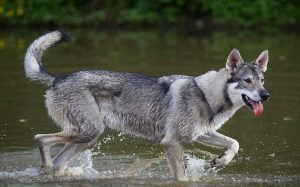 The Northern Inuit is one of the many dogs that looks like a powerful wolf. It is a hybrid that is the crossbreed of wolfs with many other dogs. The looks are powerful with strongly built, muscular, and athletic body.

Although the Northern Inuit looks like a fierce wolf, it has a pleasant and gentle disposition. It is best for a family companion due to its devotion and loyalness towards its family.

However, they do best only with an active family in an open house where they can perform their regular physical activities.

The Northern Inuit was originated in the United Kingdom when the breeders cross wolves and various dogs like Alaskan Malamute, German Shepherd, Siberian Husky.

They wanted to create a dog that has a wolf-like appearance but with strength and stamina as well as trainable like a domesticated dog. As a result, the Northern Inuit was born into this world.

Temperament: The temperament of the Northern Inuit is loyal, extremely devoted, and calm. They are a very trustworthy dog that makes an excellent family companion due to their loving, loyal nature. If there are other pets in the house, you don’t need to worry as they get along with them very well.

Behavior: Northern Inuit is not the best choice for an experienced dog owner as they are a very active, independent and somewhat stubborn dog. If you cannot establish a leadership upon them, they will become the pack leader themselves which makes controlling them difficult after that.

Personality: The personality of the Northern Inuit is friendly, calm, intelligent, and dependable. They are a very affectionate and loving dog that enjoys spending time with ts people and family. They are a dependable dog that can be trusted with guarding home as well as looking after family and pets at home.

Northern Inuit is a highly trainable dog that can only be trained by an experienced dog owner. A novice dog owner cannot train this breed. The leader should be a patient, firm trainer that can train Northern Inuit with consistency. If you fail to establish a leadership upon them, they themselves will end up becoming your leader. While training, use lots of vocal praises and delicious treats as a source of motivation.

Northern Inuit Yes, Northern Inuit is a child-friendly dog that gets along with kids very well. They re mischevious and playful, which makes them great playmates for children. However, due to their high energy, they can accidentally knock over small children and hurt them. So, proper supervision is always necessary.

The Northern Inuit dog comes in the following colors:

Height: The average height of the Northern Inuit dog is between 23-30 inches.

Weight: The average weight of the Northern Inuit dog is between 55-110 pounds.