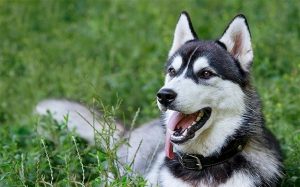 The Siberian Husky is a medium-sized dog which is quick and light on feet. It is not suitable for a first-time dog owner as it needs an experienced owner who is familiar with its behavior. It is a pack dog that looks for comfort and security at home with people.

The Siberian Husky has a wolf-like appearance but they are a calm and affectionate dog breed. Their body is compact, slightly arched in the back, and covered with dense fur. Their ears are triangular and erect that gives it an alert expression.

The Siberian Husky ancestors were originally bred by Chuckchi in Siberia around 3000 years ago. They were bred as a family companion and also as an endurance sled dog that could pull heavy weight to a long distance. The Chukchi tribes were isolated from the rest of the world and Siberian Husky was not known by the world outside the Chuckchi community.

In the early 1900s, when they began to win sled races, people began to know about it. But they got fame in 1995 when Antitoxin was needed for a lot of people that suffered from the diphtheria epidemic in the middle of winter. And Siberian Husky was used in bringing Antitoxin from Anchorage to Nome in 6 days in the brutal cold. They were then known all around the world.

The American Kennel Club recognized Siberian Husky in 1930 as a member of the Working Group. It is still famous as a sled dog, who could win any but also makes a great family companion.

The Siberian Husky is extremely friendly to children and very playful when with children which makes them a great playmate for them. They bed for small children as they often sleep by kids and provide heat to them.

Siberian very tolerant of children and is not likely to be aggressive towards them. However, small children should always be supervised as the dog might knock over them or children might play rough with them.

Temperament: The temperament of Siberian Husky is loyal, outgoing, and energetic. They are very devoted to their family and are loyal to them. It is sociable and friendly even with strangers, so a watchdog attitude cannot be expected from them. They are welcoming of everyone and greet everyone warmly.

Behavior: Siberian Husky is very vocal and tends to howl most of the time. You will be surprised that they even try to talk like a human being and some of their words can be understood. They are very mischievous and are good at escaping, so they should be kept in a well-fenced yard.

Personality: The personality of Siberian Husky is wolf-like but are not aggressive at all. They get along well any strangers and any pet. They are extremely energetic, so requires a lot of work and exercise to keep them sustained and fit. It is a family dog but due to its high level of energy, a novice owner cannot handle it well.

Training Siberian Husky is hard to train as it is an independent dog breed that is single-minded. They are smart, intelligent and tends to catch commands quickly but they do not want to obey the command easily.

It should be trained with patience, confidence, and consistency. Do not use a harsh word and force hand as they will lose trust from you. Therefore, they should be taught with gentleness. Use positive methods of training by including treat as a reward. Enroll them in agility training to keep their mind stimulated.

Siberian Husky is generally a healthy breed with a life expectancy of 12-14 years. During these years, they might face the following health conditions:

The Siberian Husky comes in the following colors: