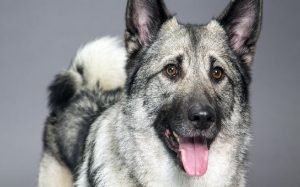 Norwegian Elkhounds are one of the oldest of Spitz-type dog breed. These beautiful breeds have a wolf-like face with a smart and great sense of humor. Elkhounds are utterly devoted to their family and make as well as guard dogs.

Norwegian Elkhounds are a bundle of energy and need a daily exercise to maintain health and even temperament. This is one such reason that they are not recommended for novice owners and for those who can’t give them enough time. Here are some information about their temperament and trainability which might help you.

When Do Norwegian Elkhound Date Back?

Norwegian Elkhound was originated in Norway in 5000 BC. These dogs have served their human companion as hunters. Elkhounds used to hunt elk which derives its name. However, these dogs are not only limited to hunt elk, in fact, they can also hunt rabbits, wolves, bear badgers, lynx, and even mountain lions.

Though Norwegian Elkhounds were known from thousands of years in Norway, but in 1887, they began showing up in the dog shows and instantly gained massive popularity. The American Kennel Club recognized the breed in 1913.

Norwegian Elkhounds are extremely loyal, energetic, fearless and reliable companion. These breed are independent thinkers with strong mind of their own. They are not the kind of a dog, who will stay underneath your commands.

Elkhounds are outgoing breed full of life. They think themselves as an important part of the family. Norwegian Elkhounds are happiest when they get a chance to go on hiking, family picnic, and other family activities.

The moose dogs are not only devoted to their families but are also sensitive by nature. If you have a Norwegian Elkhound then you will know in what sense they are sensitive.

They know when and how to act according to the situation. If their owner is sad, they will probably go and keep their head on the lap to give a good company. And when they know that they’re happy, they will show the clownish side of them to entertain their loved ones.

Norwegian Elkhounds are truly a family dog. If they’re left alone for a long time then they will become aggressive and destructive. They are barkers but will bark even more when bored.

Norwegian Elkhounds good with children if they’re taught how to treat a child. When taught properly, they are protectors, players and even followers of your child. Elkhound to follow the children to stay under their supervision.

They are playful and energetic which automatically makes them a child’s best friend. Norwegian Elkhounds are gentle, calm and non-aggressive towards children.

Norwegian Elkhounds are intelligent, smart and independent dogs which makes training hard. These breed needs consistent and firm leadership to avoid them from ruling and dominating. The moose dog are observant and will find a small chance to turn the tables.

They can easily manipulate you and if cannot, they will become extra stubborn and aggressive. Norwegian Elkhound don’t respond on harsh tone of voice. While training a Norwegian Elkhounds, you need to have deep patience and should motivate and praise them followed by treats.

Generally, Norwegian Elkhounds are healthy breeds. But there are some common health problems every dog goes through in their old age. If treated properly and immediately it can be life saving for your pets. These below are some major health issues Norwegian Elkhounds may suffer from.

Fanconi Syndrome: This condition is a serious issue which affects the kidney and tubulus that reabsorb substances. This problem might lead to improper level of calcium, glucose, phosphate, sodium and amino acids.

Hypothyroidism: This is a disorder of thyroid gland which is thought to be responsible for diseases such as, epilepsy, alopecia, obesity, lethargy and hyperpigmentation.

Sebaceous Cyst: These are follicular cyst that are found under the dog’s skin which is small and may become large as walnut. It will expels a thick white cheesy mass which can be disturbing for both you and your pet. However, it can be removed with surgery.

If you are thinking of buying a Norwegian Elkhound then it will cost you from $500-$700. Make sure you but from a reputable breeder and confirm everything about their health issues as well as temperament and personality.

The Norwegian Elkhound gives birth to 5-10 puppies at a time.

Lastly, Norwegian Elkhound are wonderful guard dogs and will fearlessly risk their life to save their loved ones if needed. However, the temperament and health issues depends on the raising as well as the quality of the breed.