Skip to content
Home » Health » Ringworm On Dogs Belly. Pictures With Method Of Prevention And Treatment

Ringworm On Dogs Belly. Pictures With Method Of Prevention And Treatment 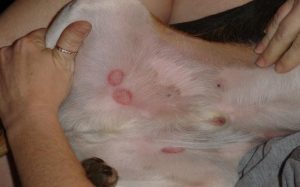 Ringworm is not actually a worm, it is a fungus but because of its round shape, it is called ringworm. Ringworm which is scientifically known as dermatophytes which is a collection of Pathogenic fungi.

In dogs, ringworm has many different appearances, most often areas of hair loss with cranky covering are seen in dog’s belly. Patches of ringworm look grey in color and some dogs may have scaly patches too. It typically looks like a circle in raised edges and there might be a pale spot in the middle. They may have hair loss and some patches of broken hair. Young and elderly dogs are mostly affected.

The first stage of Ringworm in dogs is the time when the symptoms start appearing between 4 to 14 days after they come in contact with the fungus that causes ringworm. In this initial stage, the infection usually starts out as pink or red skin patches which are either slightly raised or flat or both. The sores are very often dry and scaly and itch the dog very much.

In the next stage, the size of the rash will increase and clearing up of the center of the rash is seen. Following with a ring-shaped infection with a reddish raised border and a bald center, the rash can break leading to an infection in case your dog scratches it. The chances of the fungal infection spreading on the other parts of the body increases if your dog immediately touches other parts of its body after scratching the infected area.

Causes Of Ringworms On Dogs Belly

Dogs often get ringworms through direct contact with people or other animals who are infected with ringworms themselves. Ringworms also get transmitted through –

Symptoms Of Ringworm In Dogs

Ringworms is a fungal infection that affects a dog’s skin, hair, and nails. It can transmit to other animals and humans. Ringworms in dogs are caused by an infection with certain types of fungi. Dogs suffering from an immune disorder or young dogs that have an underdeveloped immune system are vulnerable to fungal infection.

Ringworms in dogs manipulate itself in several noticeable ways on a dogs body. You may notice red scales in your dog’s body, dark and red skin, or hair loss which may be patchy or circular. Some dog if they have ringworms can have multiple areas affected.

If you have a suspicion that your dog is suffering from ringworm than first of all take him to the vet. Your vet can diagnose the fungus presence by looking at the skin under specific ultraviolet light, but in some other cases they need to use some more elaborate diagnostic techniques too, but If your dog has ringworm on the regular basis than you don’t have to worry much.

A lot of hair follicles fall apart from the dog’s body while it is suffering from Ringworm. The hair follicles contain spores which remain communicable or contagious for a long time. They survive by either remaining on couches, clothing, furniture, and beds. The hairs contain the ability to transfer the infection to us despite being left untouched for a long time. It is very necessary to keep the environment clean so that infected hairs do not come in contact with others. Hence, though cleaning up all those hairs is a bit challenging, you’ll need to do it as it is a vital part of the treatment.

Another method you can try is to keep your dog in a separate room that is very easy to clean. You can easily vacuum and remove the infected hair follicles from the furniture and surfaces which will further help in preventing in ringworm from spreading to others.

Is There a Natural Home Remedy For Ringworm?

Yes, there are numerous home remedies for treating ringworm in dogs. Some of them include Coconut Oil, Apple Cider Vinegar, Soap and Water, Tea Tree Oil. These simple but surely effective remedies will help you treat the fungal infection on your dog if you do them with the correct procedure.

Is Treating Ringworm Without Going to Vet Possible?

Yes, treating Ringworm without going to the vet is possible. In fact, there are various natural and safe home remedies that can help to treat the infection such as Apple Cider Vinegar, Tea Tree Oil, and Coconut Oil. These remedies have very high chances of curing the rashes without even visiting a vet.

Which Part of Dog is Mostly Affected by Ringworm?

There isn’t any specific part that dogs mostly suffer from Ringworm. However, the common areas that are mostly affected by ringworm are legs and paws, head, ears, and belly portion.

Can Human Get Ring Worm?

Yes, humans can get Ringworm after coming into contact with infected dogs. It can transfer very easily from your furry pet to you which means that you’ll also very likely suffer from the infection in any parts of your body.

Visit Doglime for more preventive measures of your dog’s health.