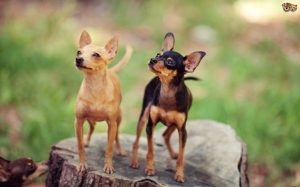 Russian Toy also is known as Russkiy Toy, mostly for its tiny size. The Russian Toy is generally an active and cheerful breed with a very special appearance.

The Russian Toy is one of the smallest dog breeds in the world with a smooth long coat which is easy to groom. It is known that the Russian toy can impress anyone with its beautiful coat and ears that look like a butterfly.

The Russian Toy as their name itself says belongs to . Dogs of this breed have an interesting past. In its native Russia, most of the breeds were large in size which was used to work in the fields. The Aristocratic members preferred small size dogs as their companion, so it was Aristocratic members who made the Russian Toy popular for companionship.

It is thought that the original Russian Toy was born in 1958 named Chikki. He was born through two smooth-haired terriers. And then Chikki himself was matted with a bitch Irma who had longer than normal fur.

Russian Toy dogs behavior with children is fine, they easily get along with children especially with the older ones. We recommend you not to interact them with younger children who are less than 6 years old, as they may accidentally drop them or step on them.

With small dogs like Russian Toy, it’s important to supervise them when they are interacting with children to make sure they are gentle towards each other.

Loyal, cheerful, loyal, playful, affectionate are temperaments of the world’s most tiny dog breed “Russian Toy”. They are noble little dogs who are typically not shy, nervous or aggressive.

If you are seeking for a small dog whom you can carry in a purse and will be happy to sit on your lap, we recommend you Russian Toy is the one for you. They are curious and fairly active dogs who prefer short walks with their owner’s. However, they tend to occur some behavioral issues, in case if their owner treats them like infants rather than canines.

The personality traits of Russian Toy is intelligent, loving and trustworthy. And once you own this breed you will fall in love with them, as they are the one who can easily impress anyone with its beautiful appearance and personality.

Training a Russian Toy is easy if you handle them with care and love. They are active and lively dogs and enjoys to work in agility trials. They can pick up basic training quickly due to their high intelligence and natural desire to please its owner. Positive reinforcement is best to encourage this tiny breed as they are sensitive to criticism.

To make your Russian Toy a well-behaved and obedient pet, we highly recommend you to socialized them since their puppyhood. For socialization, you can take them outdoors but with proper supervision as they are small in size and can easily be injured.

Amazing facts about Russian Toy are:

Russian Toy gives birth to 4-6 puppies at a time. Like all puppies, Russian toy Puppies are boisterous full of life by nature, so before owning one you need to make your home puppy-proof in advance.

If you are willing to buy a Russian Toy puppy, then you will have to pay an somewhere between $600-$800.

Dogs similar to Russian Toy are: