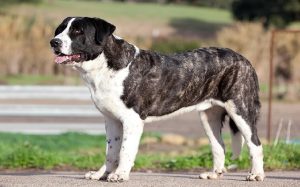 Rafeiro do Alentejo is a large-sized dog which is also known as Portuguese Mastiff or Alentejo Mastiff. They were breed to be a guarding dog for the livestock. They were excellent guarding dogs of the local livestock.

These are the Mastiff-type dog with a large, bear-like head. The eyes are dark and expressive and the ears are triangular-shaped that hangs close to the eye. Their neck is short and the body is bulky and well-muscled.

Rafeiro do Alentejo has a very dense coat where the top coat is harsh and straight. The undercoat is short, soft and thick that keeps them warm in the winter season. They are a very quiet and serious dog that cannot be hard to handle for a first-time owner. therefore they need an experienced dog owner.

Rafeiro do Alentejo is originated in Portugal and believed to be decedent from Tibetan Mastiff. At first, they were bred and used as a hunting dog and later were used as guard dogs of flocks and people’s properties. They were even used as a hunting dog for big game like lions and wild horses.

It is assumed that the Greeks brought Rafeiro do Alentejo along with them as they set their ships afloat upon the ancient seas.

The United Kennel Club recognized Rafeiro do Alentejo in 2006. The American Kennel Club is still yet to recognizes this breed which has kept it in the Foundation Stock Service since 2005.

Is Rafeiro Do Alentejo Child-Friendly?

Rafeiro do Alentejo is very tolerant of family children and is loving and gentle towards them. They will play with them and are very protective of them. However, they are not best suited for small children because of their large-sized body. They might unknowingly knock on small kids and injure them. Therefore, their interaction with children should be supervised and children should be taught to approach dogs.

Temperament: The temperament of Rafeiro do Alentejo is powerful, loyal, and devoted. They are alert of the activities going on in the surrounding and responds quickly to it. Therefore, they make a great guard dog that looks after your family and your property.

Behavior: The Rafeiro do Alentejo is a very calm dog and is not aggressive at all unless they are provoked extensively. They will show their aggressive behavior if he feels that someone or something is a threat to its people and its territory. Otherwise, this is a calm and docile dog.

Personality: The personality of the Rafeiro do Alentejo is calm, brave, and independent. They are an intelligent and alert dog that is very wary of the activities going on in the surrounding. They are naturally suspicious of strangers which makes them an excellent watchdog. If they see any stranger approaching, they will warn their owner with a loud bark.

Training Rafeiro do Alentejo is not a job for a first-time dog owner. They are a serious, independent, and sometimes stubborn dogs that need experienced dog owner, who knows his the behavior of dogs closely.

Establish leadership upon them and train them with confident and patient. Treat them gently and do not use harsh words or force hand on them. this might scare them or they can even become aggressive. reward them with treats and use a lot of vocal praises to encourage and motivate them.

Rafeiro do Alentejo is generally a healthy breed with an average life span of 12-14 year. Although they can face few canine diseases during their lifetime which are listed below:

Rafeiro Do Alentejo comes in following colors and markings: