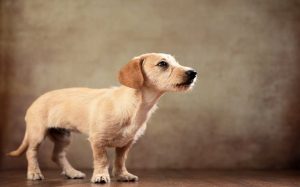 The Schweenie is a designer breed that is the result of crossing Dachshund and Shih Tzu. It is a small dog with a big personality that needs an experienced dog owner to meet their expectation.

Its characteristics and traits depend on the dominant parent breed. It does not need a great deal of activity, just running here and there and a walk sometime will do.

Schweenie is a small-sized, sturdy dog with a dense, medium-length coat, while some have a short coat like Dachshund. It will have a mustache like that of Shih Tzu. The ears are long hanging on the side of the cheeks and the eyes are of almond-shaped. They are a good-tempered dog that does great as a family companion.

Temperament: The temperament of the Schweenie is a mixed one where it can have the delightful, sweet nature of the Shih Tzu and calm and affectionate nature of Dachshund. Schweenie gets well with other pets as well as strangers if introduced properly. If it senses anything suspicious, it will bark and warn its owner which makes Schweenie a good watchdog.

Behavior: Schweenie needs constant attention and love from its people. However, if they are not given any attention and left alone for a long period of time, they can get separation anxiety and can become destructive. So, do not leave them all by themselves.

Personality: The personality of the Schweenie is bold, calm, and friendly. They love their people and are very affectionate towards them. They get along with all the members of the family and form a strong bond with them.

Training Schweenie needs firm leadership and a consistent leader who can train them with gentleness. Be patient with them and train by using positive methods of training. Reward them with delicious treats and lots of vocal praises. It will keep them motivated and encouraged to be focused on the training.

Yes, Schweenie is a friendly dog with children of all ages. They adore them and love their company. Although they do not tolerate their harsh behavior and might even bite if kids start to pull and pinch them.

So, it is necessary to teach your kids to behave around dogs and always supervise their interaction with each other.

The Schweenie is a designer dog breed that can inherit some of the genetic health problems.

The Schweenie comes in the following colors:

Height: The average height of the Schweenie is between 11-15 inches.

Weight: The average weight of the Schweenie is between 9-15 pounds.