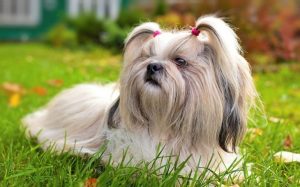 Shih Tzu is a loving canine who was originally bred for royalty in China and is still considered as a Prince among dogs.

The Shih Tzu possesses an impressive expression and is happy dogs which tend to require a large amount of attention.

The Shih Tzu is believed to be originated in Tibet where they were bred by Tibetan monks as a tiny replica of a lion. They used to serve as companion and watchdogs to the monks in the lamaseries.

The Shih Tzu was represented by the monks as a tribute to Chinese rulers, and even their name was given by the Chinese imperial court; Shih Tzu means “little lion” or “lion dog.” The Chinese gave one more name “chrysanthemum dog” as their hair on their face grows all over like petals of the flower.

The AKC recognized this breed in 1969.

Shih Tzu is an energetic dog breed which gets very well with children including the toddlers. They are very playful and as like with other small dogs they look at children as small pets. They do play with children as their siblings, therefore nipping and scratching are common in their playing.

But unwanted incident can be minimized with proper training and socialization and you need to make sure that they should never get the idea that their this behavior is acceptable.

Temperament: The Shih Tzu is a popular breed well known for their perky, happy and affectionate temperaments. They are very lively and friendly by nature and get along with people of all ages and even with other dogs and pets as well.

Personality: The personality of Shih Tzu is a dynamic mixture of an attentive and affectionate lap-dog and an amazing companion. They are very devoted to their family and staying around its family members to make them happy.

These little fellows are rarely snippy but you will find most of them very sweet and loving. They are generally trustworthy and are quite enthusiastic. They are never snobby or aggressive towards anyone.

If you see any negative temperaments in them, then it’s that their people-oriented tendencies are making them very clingy. As they are small in size, therefore they fit in even the smallest of apartments, their eagerness to please and desire to love and to be loved behavior can make them suffer to separation anxiety in the absence of their people.

Training a Shih Tzu can be easy if lots of praises and treats are included in their training. They tend to be stubborn but once you make them realize that you are offering them treats for being obedient, they will generally come around quickly.

Shih Tzus are generally healthy, but like all breeds of dogs, they’re prone to certain conditions and diseases, which include:

The Shih Tzu are found in ten color patterns:

Some of the toy breed dogs give birth to 1-3 puppies at a time but Shih Tzu a toy breed gives birth 1- 5 puppies in normal; however, in some cases, they can have an even more. The cost to adopt a puppy of this breed is around $700-$2,500.