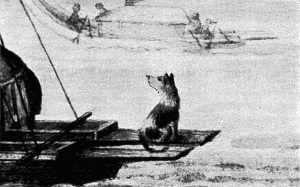 The Tahitian Dog is an extinct breed of dogs found in Tahiti and the Society Islands till the 19th century. These small-to-medium-sized dogs were used for making ornamental clothing, tools, and food purposes.

The Tahitian Dogs were first brought to the Society Islands and Tahiti (now part of French Polynesia) by the Tahitian ancestors. It is believed that the origin of this breed dates back to the 16th century when the Tahitians first migrated to Polynesia.

The Tahitian Dogs were considered a very essential part of the Tahitian society. the natives would make different kinds of tools and ornamental clothing from the body parts of these dogs. Furthermore, the people would tie them with strings around their belly and raise them with pigs as it was a food delicacy.

The teeth of the Tahitian Dogs were used as fishhooks and their bones were used to make weapons and other accessories. Like its close relative breed Hawaiian Poi Dog, it was also fed only a vegetarian diet. Their diet included Poi, Coconut, Breadfruit, and Yam.

How Did The Tahitian Dog Become Extinct?

Those who reared and had dogs didn’t focus much on preserving the Tahitian dogs. Instead, they were more curious about achieving a new mix breed. This led to a decline in the population of these dogs. Moreover, the fact that most of these dogs were killed and eaten at an early age might have also caused their disappearance.

The Tahitian Dogs had a lazy, dull, and shy temperament. The reason that they were lazy and inactive was because of the vegetarian diet they were fed. As a matter of fact, some of them were fat and obese (because of their diet) which of course, made them less active and useful. However, they had an affectionate and loyal personality,

Was Tahitian Dog a Child-Friendly Breed?

Yes, the Tahitian Dog was a child-friendly as it was an attention-seeking dog. They thrived in the affection of the children and loved laying around small children all day long. The fact that they were lazy and inactive made them perfect sleeping companions for children of all ages. Nevertheless, it was very important to introduce them from an early age as these dogs were very shy to strangers.

The Tahitian Dog was found in the following colors:

On average, a mother Tahitian Dog used to give birth to 4-6 puppies at a time.