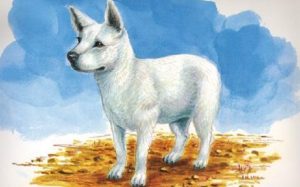 The Hawaiian Poi Dog was a small-sized Pariah dog breed that existed in Hawaii in the 19th century. These dogs were considered a spiritual protector of children and were also a source of food for the Hawaiians.

The Hawaiian Dogs had a small, long, and low body with a short-length coat. They had short legs along with a flat and large head because of their vegetarian diet.

The origin of the Hawaiian Poi Dog is believed to have happened somewhere between 300 A.D. and 800 A.D. The very first poi dogs were brought to the Hawaiian lands by the Polynesian settlers during their first migration in Hawaii.

The Hawaiian Poi Dogs were an important part of the Hawaiian tribes’ lives. Female Hawaiian natives used to take care of the dogs and pet them with their children. Moreover, they were considered to the protector of children from the ancient times. Whenever a child was born to the tribe, the infant would be gifted a puppy of this breed.

If the child died in a very early age, the dog would be killed and then burried together. However, the child outlived the dog, the child would get to wear a necklace made of the dog’s teeth. The concept behind this was the dog, which was meant to be the kid’s protector, would protect the kid even after its death.

Besides being used as a children’s savior, the Hawaiian Poi Dog was also a delicious meat delicacy. It was very common for the dogs to sleep with kids one night and be eaten by the family the following day. Because they were also kept for eating, they were only fed Poi, a granular pasted prepared by using the taro root.

How Did The Hawaiian Poi Dog Go Extinct?

The Hawaiian Poi Dogs became extinct around the early 19th century due to crossing with other breeds. People starting mixing them with other Hawaiian dogs after which the breed was no longer pure. Because they became unpure, the Hawaiians lost interest in this breed and they turned rare very soon.

Though breeders started a breeding program somewhere in the 1800s to recreate the pure version of this breed, they never actually succeeded. After twelve years of unsuccessful attempts, they declared the program a failure and discontinued it. After that, it was too long until they totally vanished from existence.

The temperament of the Hawaiian Poi Dog included playful, clumsy, and playful. They were not so active, dull, and lazy because of their vegeterian diet which was Poi. These sluggish and unintelligent dogs would also sometimes behave like hogs (also eaten by ancient Hawaiins) and often run and be in their packs.

Yes, the Hawaiian Poi Dog was extremely good with children. Since they were bred and kept as children’s protector, they were very much familiar with kids. They loved sleeping and being around children all day long. However, they were so slow that they couldn’t catch the food the kids would throw at them.

The Hawaiian Poi Dogs weren’t so active to bark and protect the children against strangers. Therefore, it was never an ideal choice to leave the toddlers along with the dogs.

The Hawaiian Poi Dog was found in the following colors:

On average, a mother Hawaiian Poi Dog gave birth to 5-7 puppies at a time.

Visit Doglime for information on other extinct dog breeds.