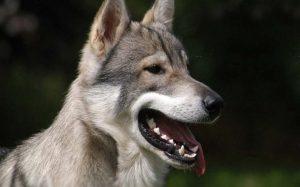 There are only a few dogs that exist which closely resemble the wolf and Tamaskan is one of the few dog breeds. It was bred to look like a wolf but also have the working drive like its relatives Alaskan Malamute and Siberian Husky.

It is not a purebred but is crossbred of Siberian Husky, Alaskan Malamute, German Shepherd, and many other breeds.

While the Tamaskan dog has a wolf-like appearance, it has maintained the temperament that makes it a gentle and loving family companion.

It has a strong, muscular appearance with a long head, small and pricked ears that are somewhat triangular. The tail is long and bushy that is hung in general and nearly vertical while at play.

The Tamaskan was originated in Finland as a working dog that does not have a long history. It was developed in 1980 when Finnish breeder bought Siberian Huskies with the intent of breeding them with other breeds and create a wolf-like dog.

The purpose of mixing all these working dogs is to breed a Tamaskan that has a strong working drive and at the same time a good temperament to keep as a companion dog.

Tamaskan is a cross of the sled dogs and is not a purebred. It has not yet been recognized by any major kennel club.

Temperament: The Tamaskan has a good temperament that makes an excellent family companion due to its gentle, loyal, and loving nature. Although it looks like a fierce and aggressive wolf, it is a gentle dog that can only kill you with a bundle of kisses.

Behavior: Tamaskan dog is a very active dog breed that needs regular vigorous exercise. If they do not get enough exercise, they tend to get destructive and anxious. So, it is necessary to take them out for regular exercise like dog’s sports, running, hiking.

Personality: The personality of the Tamaskan is friendly, playful, and very gentle. They enjoy being with its people either playing or laying by their side. They make a good watchdog as they will bark to warn their owners if they see anything unusual.

Training Tamaskan Dog is not a very tough job to do as long as you develop a firm and consistent leadership on them. Start with basic obedience training and slowly move to agility.

Reward them with delicious treats and lots of vocal praises as they complete a certain task. Never be harsh or forceful on them even if they make some mistakes.

Yes, Tamaskan gets along with children pretty well and they are very sweet, loving towards them. They are gentle and playful with them which makes them great playmates. Although Tamaskan might be a friendly dog, it is necessary to supervise their playtime with children as both parties might play rough and there might be injuries.

Tamaskan is generally a healthy breed with few genetic and canine health problems.

Height: The average height of the Tamaskan is between 24-28 inches.

Weight: The average weight of the Tamaskan is between 55-85 pounds.