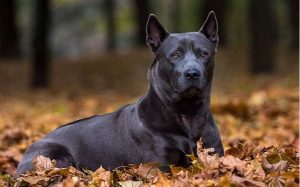 Thai Ridgeback was originated in Thailand and was brought to the United States in 1994. It was used as a multipurpose dog that was kept as watchdogs, vermin hunter, and cart pullers. It is a primitive breed and can be challenging to live with. So, it is only suitable for the dog owner that know its behavior and value it.

Thai Ridgeback is a medium-sized dog breed that has a compact and muscular body. Their ears are pricked and the head is of wedge-shaped. It got pigment or spot on its tongue making it similar to Chow Chow and Chinese Shar-pei.

Temperament of the Thai Ridgeback

The temperament of Thai Ridgeback is loyal, independent, and agile. They are very devoted and loving towards its family members which makes it an excellent companion for a family. It is an active dog that needs to be involved in physical as well as mental exercise regularly. Regular exercise and activity will contribute to their healthy and happy lifestyle.

Thai Ridgeback is very affectionate towards its family and is mostly attached to one specific person which it sees as its leader. They are protective of them and also will watch them and guard them against intruders and some other animals.

Thai Ridgeback is particularly not so good with other canines but will get along if raised together from an early age. They are somewhat aggressive towards the same-sex dog but overall they get well if properly introduced.

Personality of the Thai Ridgeback

The personality of the Thai Ridgeback is smart, independent, and watchful. They have a mind of their own and will not listen to you. If you just give it a chance, it will run your life according to its will. Therefore, it is necessary to establish yourself as to its leader from an early age so that it does not rule over you.

The Thai Ridgeback is a great watchdog as it looks after your family and your property. If they sense any strange stuff going on, they will bark and warn you about the activity.

The Thai Ridgeback is a challenging dog to train as they are independent and likes to do things on their own. So, it is necessary to develop a firm and consistent leadership at an early age. Use positive methods of training by rewarding them with treats and lots of vocal praises. Never be harsh or forceful on them. Train them gently and with confidence.

Thai Ridgeback is loving and affectionate with children. They adore them and enjoy their company. They do not like rough handling, so small children should be supervised and taught to handle dogs. Harsh behavior can lead to your Thai Ridgeback aggression, so do not leave them alone and supervised closely.

The Thai Ridgeback is a calm dog and is not naturally an aggressive dog. Like any other dog breed, they can be aggressive if treated harshly or provoked unnecessarily. They are a watchdog but will not respond aggressively if they see someone approaching. However, if they sense a threat, they might show some aggression.

How Does Thai Ridgeback Behave Around Strangers?

Thai Ridgeback is wary and suspicious of strangers. If they see someone approaching them or their property, they will bark at them. However, if they are introduced and once they see no harm from them, they become welcoming of them. They should be introduced to a variety of people at an early age, to make the sociable.