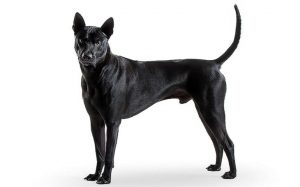 The Thai Ridgeback is a medium-sized, muscular, and handsome dog. It is a highly active and tough dog that is known for its hunting and protecting ability.

They are most suited at homes with an experienced owner, active singles, and house with yards that is big enough to perform their regular activities. Apartment life is not best suited for Thai Ridgeback as they are an active dog that needs a space for exercise, running, and playing.

The Thai Ridgeback is a primitive breed in its native country Thailand. It is a strong and muscular dog with a wedge-shaped muzzle. The ears are triangular that is set high and pricked. Its unique feature is that its hair on the back grows in the opposite direction forming a line. Therefore, this dog is named as Ridgeback.

The origin of the Thai Ridgeback was in the isolated Islands of Eastern Thailand and is believed to be 4000 years old. It might have been decedent from now-extinct Hottentot dog, that may have played a great role in Thai Ridgeback development.

In Thailand, it is mainly used for hunting purpose, pulling carts, guarding livestock and people’s properties. It also served as an alarm dog that warned its master of any intruders.

Thai Ridgeback gained its popularity in the US during the early 90s. The United Kennel Club recognized this breed in 1996. The American Kennel Club is yet to recognize this breed (as of April 2019). However, it has kept Thai Ridgeback under the Foundation Stock Service since 1997, which is the first step of the breed recognition.

Thai Ridgeback can be good with children if it is raised with them from a small age. They do great in the house with older children who know how to behave around dogs. Their interaction with small children should be properly supervised so that kids do not start pulling and playing rough.

Teach small children on how to approach dogs and guide them properly. Otherwise, the Thai Ridgeback does great with children and can become excellent play partner for them.

Temperament: The temperament of the Thai Ridgeback is independent and loyal. They are very loyal to their family and are protective of them. Their natural instinct of protection is triggered whenever they sense some threats towards their family members. They are a good watchdog, guard dog, but also can be a great family companion.

Behavior: The Thai Ridgeback is a great hunter and any furry animals are its prey. They tend to chase any small animals they caught their eye on. Therefore, it is better not to keep small animals like cats, rabbits, and mice as a pet in the house with the Thigh Ridgeback.

Personality: The Thai Ridgeback has a reserved personality which gives it a regal look. It is a highly alert dog and is very loving and protective of their family and their properties. Although it has a serious kind of personality, it is only to show the world, as it is a very fun and friendly dog that loves its family.

Training Thai Ridgeback is not for the first time or a novice dog owner. It is an independent dog that needs a good and experienced leader for training. The master should have a dominant personality and should have knowledge of the dog’s temperament.

Train them with positive reinforcement by rewarding them with treats and praising vocally. The Thai Ridgeback is known to be an aggressive dog if not trained properly. Therefore, proper training with gentleness is necessary.

The Thai Ridgeback is a generally a healthy breed with a life expectancy of 12-13 years on average. Although it is considered a healthy breed, some may have following canine disease during their lifetime.

The Thai Ridgeback come in the following colors according to the American Kennel Club:

Height and Size: The average height of the Thai Ridgeback is about 20-24 inches. The average weight is between 35-75 pounds.