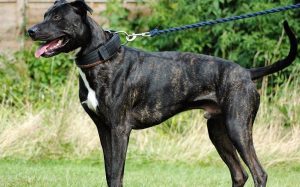 The Alaunt is an extinct Mastiff dog breed that lived in Europe, Central Asia, and Northern Caucasus till the 17th Century. They were large-sized dogs bred for fighting and hunting.

The Alaunts were thought to first originate in Central Asia as working dogs by combining breeds like Sarmatian Mastiff and Armenian Grampr. The popularity of this dog breed increased after the nomads started breeding and training them. Moreover, the nomads bred and trained these dogs during wars so that they (dogs) would help them domesticate their horses.

The tribes that began the trend of breeding migrated to other nations after which the Alaunts spread across other nations. Furthermore, people bred the Alaunts with other breeds like Metchkars, Illyrian Mountain Dogs, and several Molosser breeds. The white Balkan type of Alaunt is one of the remarkable breeds obtained from the crossbreeding.

As the trend of migration and wars increased, the breed spread over countries like France, Portugal, and Spain where they were used as working dogs.

The Alaunt was popular as Alano in Spain which was also again divided into two categories: Lebrels and Mastins. Likewise, they were called Alaunt de Boucherie in Portugal. Today, most of the descendants of the Alaunts are trained as cattle dogs.

How Did Alaunt Get Extinct?

The Alaunt dogs got extinct in the 17th Century because of less conservative measures. They were used in crossbreeding with breeds of other nations by the migrating people. This prevented them from focusing on increasing the population of Alaunts.

Similarly, as the Alaunts were mainly used as fighting and war dogs, their number declined due to the deaths in combats and wars. Therefore, they disappeared totally by the 1600s.

The Alaunts had loyal, active, independent, and energetic temperament. They were mostly known for intelligence and adaptable nature. They were so smart that they would sometimes become bossy and claim dominance in their pack. Despite that, they were very faithful to their pack.

As the Alaunts were trained for war primely, they also had the ability to adapt to different climatic conditions and situations. Because of their independent and clever personality, they would sometimes do as their will.

Was Alaunt A Child-Friendly Breed?

Yes, the Alaunt was a child-friendly dog because of their affectionate and loyal nature. As they were so used to be trained by people, they would not hesitate involving in fun activities with children. Once formed nicely, they would even be protective of their little buddies.

However, a thing of concern was the combat instinct of these large-sized dogs. They would easily harm the kids even without intention as their fighting skills come to play. Therefore, it was never an ideal choice to leave the kids alone with the Alaunts.

The Alaunt dog was found in the following colors:

On average, a mother Alaunt could give birth to 6-10 puppies at a time.

Follow Doglime for more information about other extinct dog breeds.