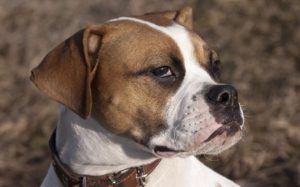 The Valley Bulldog, also named as Bull Boxer is not a pure breed, this dog is the result of a cross between English Bull Dog And the Boxer.

The Valley Bulldog is characterized with a wrinkled face and a sturdy, powerful appearance, These dogs have all the features of a Bulldog.

The Valley Bulldog is an excellent dog with cheerful, alert, social and loyal temperaments. They easily get along with people and other dogs too. These dogs are calm-natured and obedient, though they can act erratic and silly at times and it’s fun to watch them being silly.

The Valley Bulldogs are intelligent, smart and learn things quickly. These dogs love to entertain and loves to be around its people. They make amazing pet and watchdog as well in the family. They are not really heavy barkers but will bark at sounds that are not ordinary.

The Valley Bulldog has a stable and affectionate personality. These dogs have are independent natured and so they require a confident and dominant owner who can give them enough exercise and expose them to new things, so they can avoid unwanted behaviors.

The Valley Bulldog is devoted to its people, however, it is important to make sure that they are happy and are not ignored as neglecting them for a long time can make them unhappy and depressed.

Valley Bulldogs get along well with people of all age groups. They are non-aggressive and are natural guardians and protector of children. They are playful with children, however, they can be little boisterous at times so supervision is needed when young children or toddlers are around.

How Does It Feel To Live With Valley Bulldog?

The Valley Bulldogs have intelligent and obedient behavior making them easy to train. Though its owner needs to have a strong leadership trait as this dog breed will look to its owner to show them what its owner wants from them.

The Valley Bulldogs are excessive chewers and so few well-made durable toys are required to have nearby in order to save your furniture and things.

The Valley Bulldog is not aggressive dogs. They are very calm and gentle and with early socialization, they are welcoming with strangers. They are friendly with other dogs and pets in the family.