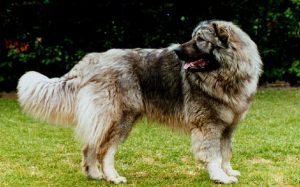 Yugoslavian Shepherd Dog has many names like Šarplaninac or Sharplaninec, Macedonian Shepherd, and Illyrian Shepherd. It is a large-sized mountain dog used for herding sheep and guarding livestock. It is a loving breed that also does well as a family companion but needs a house with a yard for them to move. They are not at all suitable for an apartment.

The appearance of the Yugoslavian Shepherd is big with a strong and muscular body. The head is big and proportionate with the body that is built with a lot of bones. The coat is double with a soft, dense, weather-resistant undercoat and 3-5 inches outer coat that is longer around the neck, legs, and tail. The ears are V-shaped, folded and eyes are dark, almond-shaped.

The Yugoslavian Shepherd was originated in the Southeastern Mountain regions of Yugoslavia. It is believed to be descended from Tibetan shepherd dogs.

The exact date of its origin is not traced but the documentation about its existence dates back to the 19th century. It was famous as a shepherd dog that was used for herding and guarding livestock against predators.

The Yugoslavian Shepherd is a large dog breed that is not at all recommended at home with toddlers. Their big size may fall on small children while playing and they might get hurt. However, they do well at a house with older children who know to behave and handle dogs.

Always supervise your dog and children interaction as to avoid any rough playing from either party.

Temperament: The temperament of the Yugoslavian Shepherd is calm and easy going. They do well in a house where they get to do their required activity regularly. They are loyal to their people and are very loving towards them. It is a very dedicated guard dog that also guards the house of its people from intruders.

Personality: The Yugoslavian Shepherd has a protecting personality. They are very protective of their flocks and the same goes with their family. If some threat is coming towards its people, they are ready to defend them.

Training Yugoslavian Shepherd is not for a first-time dog owner or an inexperienced dog owner. They need a leader who can train them with firmness and consistency. If the owner fails to do so, it will see itself as a leader and after that training will become hard.

Use positive methods of training with delicious treats and a lot of vocal praises to motivate them. Never use force hand or harsh words even if they make a mistake. This will only scare them or sometimes can even make them aggressive.

The Yugoslavian Shepherd is generally a healthy breed with a life expectancy of 11-13 years. However, during these years, they are likely to face a few canine diseases.

The Yugoslavian Shepherd come in the following colors: