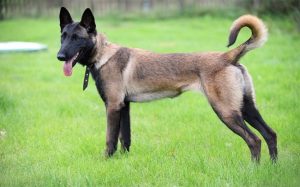 The Belgian Malinoi is one of the four Belgian herding breeds- Tervuren, Groenendael, Malinois, and Laekenois that was originally bred for herding purpose in Belgium in the late 1800s.

The Belgian Malinois dogs have very strong tracking skills which made this breed popular choice for military, police and search and rescue agencies. These dogs were also used in World War I.

What kind of Temperament do the Belgian Malinois have?

The Belgian Malinois has a loyal, friendly and affectionate temperament. He might have a strong working-dog background, but he provides companionship and family time above everything else.

Very protective of his family, proper, and territory, the Malinois makes himself a passionate but restrained watchdog. Overall, the Belgian Malinois is an obedient, hard-working, sensitive and protective breed.

Personality traits of the Belgian Malinois

The Belgian Malinois has a beautiful, smart and protective personality in any situation which makes it an outstanding watch and guard dog. He is very affectionate with family members but not so good with strangers.

Having excellent watchdog abilities, the Malinois protects his loved ones and their property with great devotion. This dog is very demanding and needs a dominant owner who can control his aggressiveness.

No, the Belgian Malinois is not a child-friendly breed at all. Though it is a loyal, affectionate and friendly breed, it is not a dog that you would want your kids to play with.

If you still will to buy a Malinois and have kids, then you better make sure that you don’t leave them out of surveillance. Kids are never safe alone with these dogs.

With early socialization and obedience training, you can polish him to be a fruitful companion as it is a very smart and intelligent breed. You’ll need a lot of patience and work to improvise him.

How it feels to live with a Belgian Malinois dog?

The Belgian Malinois is a very smart and obedient breed having strong protective and territorial instincts. This breed requires extensive socialization from an early age, and firm training.

Having the natural instincts of a herder, the Malinois can show his chasing and pushing skills when playing along with the kids. Obedience training and socialization should be given timely.

You should not teach protection training as it comes naturally by birth. They are excellent pets for your house and provide a loving companionship.

The Malinois dog is good for working and competitive obedience, but not for kids who run and scream. A Belgian Malinois will always be trying to keep the kids in one spot!

The Belgian Malinois is very adaptable and can live in an apartment if he is sufficiently exercised. The dog loves cool climates but also adapts nicely to others as well.

The bottom line is that the Belgian Malinois is a very smart and affectionate breed. However, it is not safe if you have small kids. The dog is aggressive and protective against strangers but does well with early socialization.