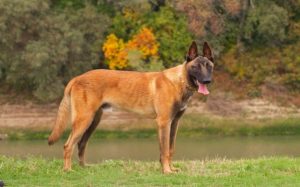 Often being confused with the German Shepherd dog breeds, the Belgian Malinois are elegant and hardy dogs with coat built to survive on the Belgian damp climate.

Belgian Malinois are medium-sized dog bred to herd centuries back, and now they work as rescue dogs and police dogs. Bred in Malines, Belgium, Malinois are intelligent dogs with a great deal of stamina.

The Belgian Malinois is one of the four breeds of the Belgian Sheepdogs which were developed in the late 1800s in Belgium. In 1891, The Club du Chien de Berger Belge (Belgian Shepherd Dog Club) was formed to determine how many different dogs were formed only of the shepherd dogs in Belgium.

The breeders worked very hard to form Belgian Malinois breeding them with dogs who had similar temperament, coats, and looks. Then the Belgian Malinois flourished but unluckily, they were almost vanished because of the World War I being used as a military dog, and many lost their lives during that period.

Belgian Malinois officially introduced in the U.S. by the American Kennel Club in 1959, and have been used as both military and police dogs ever since.

Belgian Malinois can be good with children especially when they are raised with them. Because of their herding instinct, they may nip, bite and chase them. They may herd your children while playing. You can avoid these behaviors by teaching them these kinds of behavior are not acceptable.

You should also teach your children not to pinch or pull its tails and push Malinois, it may lose its temper and become aggressive.

Belgian Malinois are excellent watchdogs and will protect their territory and family until the end. They are very affectionate with their family but suspicious of strangers.

Belgian Malinois are happy when they are being used to work. These dogs are working dogs, are demanding and needs an experienced owner.

It is important that they should be socialized at an early age as they are wary of strangers and may become aggressive. Because of their herding heredity, they are likely to chase bikes, cars, and even children when they are bored.

Even though Belgian Malinois are willful and stubborn at times, but when it comes to training, they usually thrives on advance obedience, agility training and tricks. These dogs are highly trainable and can read even a small changes and movements on the facial expression. They are also known as “In Tune” because of being attentive to their trainers and one step ahead of the given commands.

Belgian Malanois are not for the first time owners because they are highly intelligent and manipulative. They can sense the lack of leadership and waits no time to rise on the position.

Usually, Malinois are a healthy dog but they tend to suffer from hip and elbow , anesthesia sensitivity and progressive retinal atrophy (PRA).

However, the health issues depends on the owner. If they take care of their canine they won’t suffer from diseases. If they do, an early treatment can save their life.

Breeds Which Are Similar To Belgian Malinois