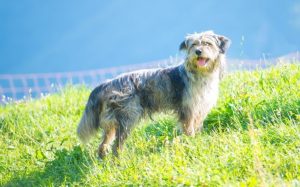 The Bergamasco Sheepdog is an ancient shepherd breed, which has remained unchanged for centuries, they are overprotective and alert which makes them excellent watchdogs.

These fluffy herding dogs are muscular and heavy-boned and featured with a large head and a thick tail that hangs down. Their entire body is covered with an abundant coat that form mats.

Bergamasco Shepherd is a breed of dog whose origin was in the Italian Alps near Bergamo, where they were originally used as a herding dog.

It is believed that the first Bergamasco dogs was originated from Asia. And later they were brought across by migrating Asians looking for fresh pastures.

They were bred for herding and guarding sheep on high mountains. And this job perfectly suited them due to their dense, woolly and weather-resistant coat.

They almost went to extinct, but thanks to Italian breeder named Dr Maria Andreoli who took it upon herself to save the breed during the 1960s.

These weird-looking Bergamasco Sheepdogs are known to be child-friendly, they love playing with children and especially if they are raised together.

Their natural herding and protective nature naturally come, when they are around children. Dogs of this breed are also considered as therapy dogs for disabled children.

The Bergamasco Sheepdog breed is very strong-willed, brave and intelligent. Just as many other large dogs, it is a very peaceful breed.

They are peaceful, patient, tolerant and great with kids, and they are also very good and protective watchdogs and guards. But not aggressive guards, unless there is a real danger.

Although they aren’t aggressive, at times they can be little suspicious and disrespectful to strangers. So early socialization is a must. The Bergamasco gets well with other dogs pets in homes, even better if they are raised together while young.

Due to their heavy size, Bergamoscos are not suitable for apartment living. They require a large yard to exercise in.

Like other herding dogs, Bergamascos Sheepdogs are also intelligent, which makes them easy to train. Using positive reward can help you more. Socialization at an early age is a to avoid future problems.

To grab their attention, you need to be firm and kind and create a boss in yo should be able to receive all the required exercise from running to walking to keep them healthy and active.

Bergamascos are old breed and hasn’t changed for centuries, therefore they are very healthy and doesn’t tend to have any serious disorders and diseases. But there are some minor health issues which appear in them, such as:

Bergamoscos are found in different colors such as:

If you are willing to have a Bergamoscos pup as your new family member, then it is essential to keep your home and garden puppy- in advance before their arrival.

Puppy-Proofing your home and garden means putting away tools and other implements that a boisterous puppy might injure themselves on. Electric wires and cables need to be put away out of their reach because puppies love chewing on things and toxic plants should be removed from flowerbeds and the home too.

Dogs similar to Bergamascos are:

A lot of people believe that Bergamascos are typical outdoor dogs that are alone all day long, but that is not true at all. Bergamascos love their people, they are loyal and loving to them and they want to live with them! Of course, they do like outdoors, but if his family is inside the home, he prefers to be inside with them.