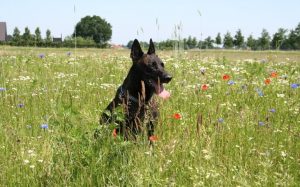 Dutch Shepherd is a lively, alert and intelligent breed, they maintained their herding instincts for which they were developed. These breeds were originally bred to keep flocks of sheep in a particular location, for which they are perfect runners.

The Dutch Shepherd is considered to be an farm dog, as they used to work as farm guard, drover and livestock as well.

The Dutch Shepherd breed is originated in the Netherlands in the 1800s. Thy were mainly bred to herd sheep, cows, and other livestock and to protect farms and alert from strangers.

Dutch Shepherds are known to be loyal and intelligent companions and workers. The need for Dutch started to get decrease after the industrialization came to existence. Some Dutch Shepherd fans created the Nederlandse Herdershonden Club in 1898 to promote the Dutch Shepherd.

The Dutch Shepherd are very smart and energetic, and this is what makes them an ideal family companion for children as well. They are gentle and protective towards children.

Like all other breeds they should be supervise when playing with children to make sure play time doesn’t get out of hand. Along with that your children should also be trained on how to approach with dogs to avoid accident.

The Dutch Shepherd is highly trainable and eager to please dogs. The temperament is loyal, affectionate, alert, obedient, reliable, intelligent.

Dutch Shepherd makes very good guards and they are very loyal to their owners. The Dutch Shepherd is very strong. Their bite force is 224 PSI, their bite can even break a man’s arm in a second.

The Dutch Shepherd owns a very playful personality. Everytime you play with, they are always excited and energetic. Plus kids will have an amazing playmate to play with.

Dutch Shepherd is highly trainable dogs and known to be the healthiest and easiest to train dogs. They require adequate exercise and a confident trainer to make them their best.

They tend to be independent due to which they may be little reserved with strangers, therefore they need proper socialization soon after they are adopted. Since they are dominant by nature, so they need to be trained in a very calm and authoritative way. Avoid harsh training and commanding in loud voice.

According to Dutch breed club, these breed don’t tend to suffer any serious physical or mental disorders, the few health issues include:

The Dutch Shepherd are found in various colors, which include:

Adopting a Dutch Shepherd would be life-changing, not only for the dog but also for the owner. Buying Dutch Shepherd from a reputable breeder would be the safest. When buying a puppy, be sure that the breeder does genetic testing of their animals. And be sure to verify the health information.

Visit Doglime For More Dog Breed Information and their behavior