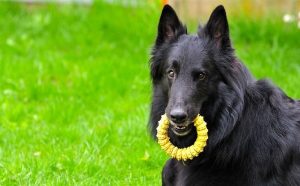 The dense-coated and elegant dog is known for its striking protective personality, the Belgian Sheepdogs one of the most beautiful herding dogs among the four Belgian herding dogs.

The Belgian Sheepdog is recognized for its endurance and ability to learn quickly. Before adding this medium sized dogs with pricked ears, here are some inside information about the breed you need to know.

Origin And History of Belgian Sheepdog

The Belgian Sheepdog date back to the 19th century when the European dog breeders decided to develop dog breeds from their own country. Among the four Belgian herding dogs, one with a long hair, triangular ears and with dense black coat, became popular as Groenendael also known as Belgian Sheepdogs.

In early 1900s the breed began serving as a police dogs and in the World War I they were used as messengers, sentries, and draft dogs pulling machine guns. Their popularity start raising after the World War I and the Belgian Sheepdog club of America was formed in the year 1919.

Belgian Sheepdogs are obedient and gentle with children. If you want a canine shadow in your house then you should have a Belgian Sheepdog in your house. They love playing around with kids and enjoy spending time with their owner inside the house or can even adapt the outdoor living.

They are highly protective to their territory. They may take a little longer to adjust with other kids with which he’s not familiar to. If your children loves playing balls, is a bicyclist, loves playing fetch games then your pet and your kid would become best of friends.

Being a herding dog, the Belgian Sheepdog may tend to nip and herd the children. You should teach your dog that this kind of behavior is unacceptable.

Talking about their personality, they are highly intelligent, obedient, active and extremely protective. Being bred as a herding dog, they like being constantly busy whether it’s a long walk or chasing a frisbee. They love family time and may tend to have separation anxiety. If they are bored or left alone they will become destructive and noisy.

With their herding nature, they are prone to chase bike, cars, kids or even other animals. Their temperament can be affected by various reasons such as genetics, raising, and most importantly training. A Belgian Sheepdog should be trained at an early age to avoid behaviors aggression and alpha personality. A well trained Belgian Sheepdog is calm and won’t bark without a cause.

Belgian Sheepdog thrives in advance obedience training, agility tasks, and tricks. However, they tend to become hard-headed and can be difficult to train at times. They are so alert to their trainers that they can sense even a small movement made by their trainers and can also read their facial expressions.

With their ability to learn quickly and eager to learn new things, they are one of the hardest competitors and champions in agility and herding competitions. Though they are easily trainable, they are not for the first time owners who don’t have the idea to remain consistent with training. They won’t wait a single moment to manipulate and acquire the personality of being the leader.

All dogs have the capacity to develop genetic health problems. Likewise, Belgian Sheepdogs are prone to have diseases such as cancer, hypothyroidism, epilepsy, hip, and elbow dysplasia.

The health problems are not detectable in a growing puppy which is why you must buy a pet with a reputable breeder and must meet at least one of the parents of the pup.

The Belgian Sheepdog gives birth to an average 6-10 puppies at a time.
The cost of the puppy varies from breeders to breeders and whether the puppy is male or female. The price of the puppy is somewhere between $1200 – $1400.

Belgian Sheepdogs are found in four colors. They are –

To Which Dog Breed Are They Similar To?

Lastly, Belgian Sheepdog are a wonderful addition to your family. They thrive on human counterparts. Your new furry pet won’t dissappoint you as they are playful and obedient.