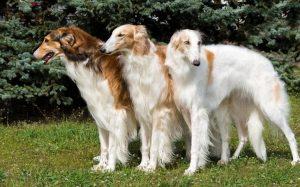 The Borzoi, originally from Russia is known by many names like Russian Wolfhound, the Russian Greyhound, and the Siberian Wolfhound. They are a sighthound known for its elegant looks, agility, speed, and courage. Borzois are a racy athlete with a tall, slender body and graceful moves. They have a but deep chest and curvy back.

Borzoi has a long with their ears laying back in the neck and a long feathery tail. They have a thick ruff of curly hair around their neck.

Borzoi were bred in Russia centuries ago as a coursing sighthound. They were bred by Russian noble for wolves hunting and stage hunting. Their job was to chase wolves or stage and hold them till the hunters come to bind it. These extravagant affairs concluded with a great feast i the manor house.

After the Russian Revolution in 1918, many Borzois were slaughtered due to their association with the aristocracy. Luckily, few Borzois were sent to other countries as a gift to the royal families which help Borzoi’s admirer to save and bred more. The Borzoi currently rank 98 of 193 among the registered breeds of American Kennel Club.

Borzoi is not a aggressive dog but they are not tolerant of children poking and pulling. With their tall body, they can knock over a child and injure them. So, it is best not to bring a Borzoi in a house with small children. However, an older children can be a great companion with Borzoi.

Always supervise your child and dog playtime. Teach your child, how to approach a dog.

Borzoi has a quiet, gentle, and intelligent personality. While as a puppy, they are loud and naughty but as they reach adulthood, they become quiet and sensible, more like a cat’s personality. They want to be loved and nurtured by their people.

As a quiet dog, Borzoi is not likely to make a great watchdog. They are not suspicious of people and do not bark if he sees some stranger approaching them, rather they become friendly towards them. If you are looking for a dog that is quiet, light on feet and is graceful and elegant looking, Borzoi is for you.

Being a hound dog, training Borzoi can be a challenging job to do like with any hound dogs. They are independent and like to do things on their own without anyone interpreting them. However, positive reinforcement will do a trick. Include treats in your training and do no make the session long and repeat the task. They will be bored and will not focus on you.

Start training your Borzoi as soon as you bring him home. They are capable of soaking up things even in eight weeks old.

Borzoi is generally healthy and the more likely health problem they could face is a genetic health condition. Other canine diseases they might suffer from are:

Borzoi has a long coat which can be silky, flat, curly and wavy. Theirs coat comes in any colors combination. They shed a lot but only once a year and should be brushed frequently.

The average cost of a Borzoi puppy is between $1000- $1200 USD. But, if you consider adopting a puppy, it can be comparatively low that includes only the expenses of taking care of the puppy before adaptation.