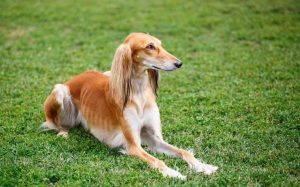 Saluki, well- known to be the world’s oldest breed with a slim and rugged body who was the hunting hound of kings for thousands of years. They are swift and agile breeds who love to chase.

The Saluki dog breed is a slim dog breed which resembles Grey Hound. It is a dog with a long and narrow head, black or liver-colored nose and large oval sized eyes and long ears that dropdown. Their neck is long and the chest is deep and narrow and legs that are straight and a long tail that is carried low and well covered with hair.

These slim dogs were considered to be highly prized for its good looks and hunting ability. This breed got its name from the Arabian town of Seleucia, an ancient city that no longer exists today. The Saluki dog breed was bred to work in the desert and to live with the nomadic tribes.

The Saluki is believed to be the oldest breeds and their ancestors were thought to date back as earlier as 7000 B.C. As like other hounds, this breed was also special to World’s greatest, including; Egyptian Pharaohs, Alexander the Great and many more.

The Saluki is good with children if the children are gentle with them. They are active dogs who will keep entertaining your child. Like other hounds, they are not considered to leave alone with young children who may be rough to them. Always supervise your child with dogs to make sure their play is not rough.

The temperaments of a Saluki is gentle, friendly and devoted. They can be a little bit aloof with strangers and even with its family members as they hold an independent nature.

The Saluki has a loyal personality who become attached to its master. These dogs are fairly sensitive and submissive by nature to people and other dogs.

They are a calm and pleasant dog which make good companion but are not easy-going with other dogs of the same breed. However, they are not aggressive to human but their natural instinct is to chase and kill non-canine animals.

The slim, leggy canine is highly adaptable and able to live and work in any climate and situation. Dogs of this breed are magnificent, but if you are planning to own this breed then be ready to face challenges.

Training Saluki is moderately okay as they are a gentle dog with a cat-like personality. They are generally independent by nature, therefore they will not respond well to rough or gruff treatment or training. They require a confident master who can give them consistent and firm hand training.

Facts about Salukis are:

The health problems that Saluki’s are prone. include:

The Saluki dogs are found in six colors:

A Saluki bitch can give birth between 4-8 puppies at a time. And the price of Saluki puppies will cost you about $2500.

Dogs similar to Saluki are: