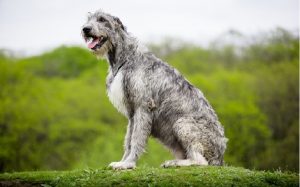 Irish Wolfhound dogs are also known as the “giants” of the dog world. You might be getting worried about the temperament of this dog. However, despite their size, they are known as gentle giants. These breeds are very reliable and loyal to their family.

Their sheer size is enough to scare away all those bad intentions, and any intruder doesn’t have enough courage to approach your territory without permission. Irish Wolfhounds are excellent guard dogs which will protect you and your territory to the fullest.

There are some debates about the origin of the Irish Wolfhound, most people believe that the breed’s middle eastern Sighthound ancestors were brought to the British Isles by Phoenician sea traders. Some people think they were crossed with local mastiffs to produce what they looked like a giant greyhound.

According to the Roman consul Aurelius, in 391 AD that seven Irish Wolfhound had been sent to Rome as a gift. And no wonder, their size made them the fearsome in wars, and capable of pursuing the Irish Elk, double their size. Their job was to pull men from the horse and chariots during the war as well as hunting boars, elk, and wolves.

The Irish law permitted only kings and nobles were allowed to own an Irish Wolfhound. According to the legends, the folk Hero Finn MacCumhaill owned 500 Irish Wolfhound. However, the breed almost got extinct thanks to the Captain George Augustus Graham who bred Glengarry Deerhounds, Borzoi, and Tibetian Mastiffs to revitalize the Irish Wolfhound breed.

Irish Wolfhound is considered as one of the rare breeds which almost got extinct in the 1700s when its habitat was destroyed. It was very expensive at that time to own an Irish Wolfhound by anyone and only ruling class people would own. They were used to kill wolves and when there were no wolves left to hunt, its number decreased rapidly and almost became extinct.

Today, the Irish Wolfhound is not found in many numbers but are also not too rare. They are an uncommon dog breed but if you want to own one, the breeder can work to get you the elegant Irish Wolfhound.

Yes, Irish Wolfhound dogs are child-friendly as love children and are very gentle and protective of them. What makes an Irish Wolfhound happy is always a child to play around. They will jump, run and tend to mimic every movement made by children.

Irish Wolfhounds are huge, so considering their size, they are best suited for homes with older children than toddlers. They will never hurt your child but can accidentally knock them down because of their size. These gentle giants are never aggressive with kids. Your kids are always safe with Irish Wolfhounds.

The Irish Wolfhound dogs are gentle and have a strong desire for human companionship. They are loyal, calm and non-aggressive with their family but are wary of strangers.

When it comes to watching duties, they are alert but are not suspicious of anything which makes them poor guard dogs. However, their size might be a plus point to scare anyone. They are very polite with everybody and want every people to rub their belly.

These breeds are independent but are quite lazy too. You will find your Irish Wolfhound sleeping on the couch or anywhere. If you forget the exercise time, then your dog probably won’t care and won’t demand as well. In fact, they will enjoy their sleeping time.

Being a sighthound, they will probably watch each and every step their prey takes. Although they are considered as one of the best family companions, the hunting instincts are still strong in them.

These dogs get well with people and other animals they know but will be aggressive to other dogs and animals they don’t know. Irish Wolfhounds should not be trusted off-leash. They are huge and may get hard to handle the giants if they get aggressive.

Irish Wolfhounds are difficult to train because they have a mind of their own and like to do things on their own terms. These dogs will be hard to handle for inexperienced dog owners.

They are very stubborn which makes training hard. Irish Wolfhounds are extremely intelligent and tend to behave like “they know everything”. They should be motivated followed with treats. Offering treats after every command they follow might help you.

Irish Wolfhound can give birth to 2 to 12 puppies.

Height: The Male Irish Wolfhounds have the height of 34 to 35 inches whereas the female has lesser, from 32 to 34 inches.

Weight: The average weight of the Irish Wolfhound is about 140 to 180 pounds.

Which Dogs Breed Are Irish Wolfhounds Similar To?