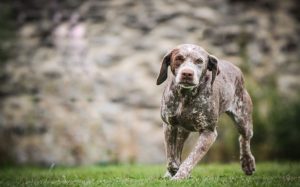 The Braque Du Bourbonnais is an ancient breed, well-known as a gundog in his native Bourbonnais region of France. This dog was bred to use as pointer specialist, skilled tracker, and flusher.

This attractive looking dogs are very calm and affectionate family member. They are often noticed for their unique look. The coat of this breed is short and tight which makes them slimmer and more handsome. Their rustic skin makes them look different.

These unique looking dogs is known to be one of the oldest of all pointing breeds. Their exact origin is still unknown because his existence dates back to before written records were kept for dog breeding. But everyone agrees that the breed was developed in Bourbonnais, a historic province located in central France.

The Braque du Bourbonnais dog has been in existence since before 1598 when he began appearing in French literature and art.

The Braque du Bourbonnais, because of its unique look started gaining popularity by the beginning of world war I. But by the end of world war II, they were nearly extinct because of the lack of breeding activities during the war. The Stringent breeding practices saved the number of remaining Braque Du Bourbonnais.

The Barque du Bourbonnais are easy-going with children. Puppies of those dog breeds are rambunctious and overwhelm young children if untrained. Most of them are very tolerant of children and often get attached to them.

If you adopt a Braque du Bourbonnais pup soon after their birth, then you can adjust it at home with children.

The Barque du Bourbonnais is an excellent hunter with calm, affectionate, polite and co operative temperament. These dogs are nature lovers and generally prefer to stay external than in homes.

They are passionate about searching out the game. Being a gundog, he has a typical working dog temperament. Dogs of these breeds love to be around its owners and will follow them anywhere they go. Leaving them alone would not be a good idea, because it can result in a destructive Barque du Bourbonnais.

Like other breeds Braque du Bourbonnais don’t need be socialize from their early age onwards, they are generally acceptable of everyone, even strangers. He is easy going with other dogs and pets, but need be supervise with small pets such as rabbits and cat.

Braque du Bourbonnais dog has the ability to train easily and quickly. They feel more exciting with humans, especially if they are getting trained under their leadership.

Being an intelligent breed they respond well to training, you don’t need to motivate them for training, they are ever ready for their training.

Some possible health problems that may be seen in Braque du Bronbonnais are:

This unique looking dogs are found only in two color pattern:

According to doctors, the Braque du Bourbonnais is naturally capable of giving birth up to 3 to 8 puppies.