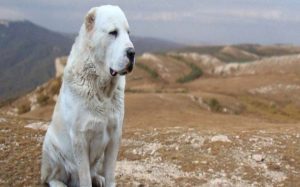 The Central Asian Shepherd is known to be an ancient working flock guardian, who is classified as Molossian group 2.

The Central Asian Shepherd is known to be an excellent multi-purpose dog breed in its native country Russia. This breed is used for many purposes including livestock protection, personal and property protection, dogfighting, military work, and family companion as well.

This multi-purpose breed is thought to be one of the oldest breeds of the planet as there are records of this breeds which is about 5000 years ago. Unlike many other breeds today, they are not man-made or created by any specific person or country. They are developed through natural selection.

Because of their loyalty, courage, and devotion, they usually used to work with the man and other dogs in the challenging region of Mongolia, the Urals, the northwest border of China, Asia Minor, and the Caspian Sea.

And due to their courage, high stamina and endurance, they are often mentioned as “Wolf Crusher” or “Volkodav.

In spite of the fact that these cool-looking breeds are not recognized by the Kennel Club in the UK, but they are being recognized by many other international breed association.

The Central Asian Shepherd is known to be easy going with kids and tends to form a strong bond with their families and children as well. In spite of being large, they are gentle and kind when they are around children.

However, care has to be taken when they are around children because they are known to be overprotective and may hurt your child accidentally.


Central Asian Shepherd Dog are well-known for their loyalty and courage and because of this temperament, they are highly prized in their native land. And their this devoted nature makes them a good watchdog too. They are very fun-loving to their families and will always come forward to protect them without any hesitation.

Central Asian Shepherd may not be the best choice for first-time owners, as they need to handled and trained by someone who is familiar with such a large and powerful dog.

Interacting them directly with a stranger may not be a good idea, as they are known to be aloof and wary with strangers. They may show their aggressive behavior towards strangers.

Central Asian Shepherd Dog is highly intelligent dogs are known to be quick learners as well and it makes them easy to train. However, their training has to be started early and it has to be consistent throughout their lives.

The Central Asian Shepherd are healthy dogs with an average life span of 12-15 years. Unlike many other, dogs don’t suffer from serious health problems, thanks to their larger gene pool.

But some dogs of these breeds may suffer from some common health issues, such as:

The Central Asian Shepherd can have a short to moderately long coat with a very thick, dense and heavy undercoat. They come in a variety of colors, such as:

If you are deciding to adopt a Central Asian Puppy then you may have to go on for the waiting list, because these puppies are rare and not easily available. Puppy of this breed will cost you more than £500.

In future if you own a Central Asian Shepherd puppy then you need to take care of the fact that they should not be over-exercised because at that age their bones and Joints are growing, and if you apply to much pressure on them, then they may face problems in future.

Other dogs similar to this breed are: