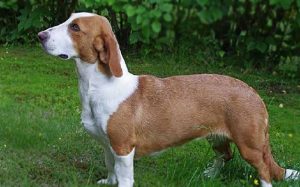 The is a medium-sized dog developed in Sweden for hunting purpose. They have a short straight leg that never bends and long body. The head is big and long with eyes that are clear, alert and dark. They have a hanging ear like other hounds and a long tail. is a scenthound, used for tracking animals like deer, rabbits, and sometimes even wild boar.

Although looks short, they have great stamina and can work with his human all and even after that. At a first glance, they do not look so much impressive but after knowing him, you will find him a great companion that is friendly, active, loyal and determined that every owner wants in a dog.

was originated in Sweden when a small-sized German hound known as the Westphalian Dachsbracke were brought to Sweden and mixed with the local hounds. They were originated in early 1900. They were bred to track down and drive animals like foxes, deer, and other wild animals towards the hunters. The name ‘‘ was officially given in 1947 which was selected through a newspaper contest.

was accepted by Swedish Kennelklubben in 1949 and after that, it gains its popularity in Sweden. It was recognized by United Kennel Club as a member of the Scenthound group in 1996.

is a very friendly dog and they can get along with children very well. They are suitable for children as they are affectionate, playful and sweet around them. Although is not an aggressive dog, children should be taught to behave around them and parents should supervise their playtime.

is an obedient dog and can be easy to train. However, they are a bit stubborn sometimes and independent, which can make training quite a tough task to do. So, you should develop a firm leadership on them and teach them with a positive method of training. Don.t be harsh on them as they will get scared and will not catch anything you are teaching. Be gentle, use treats and vocal praises to keep motivating them.

needs to be mentally stimulated, so include trick games like hide and seek, finding treats and other interesting games. Socialize them with a variety of people and other pets from an early age.

Drever life expectancy is between 13-15 years and between these years, they are usually healthy. However, Drever may suffer from genetically related health problems and few of the canine diseases that are listed below:

has a short thick coat which is harsh and straight. This breed coat is slightly longer than most scenthounds. The hair on the back, neck tail area are longer then other parts of the body.

Drever comes in different colors and marking. The colors

The average cost of Drever puppy is between $600-$800 from a good breeder and more from a top breeder. Although, if you want to save some money than adopting one is a great idea as it will save some of your money and also a homeless puppy will get a good home and family. The adaptation usually cost between $300-$400 which include the expenses of taking care of puppy before adoption.