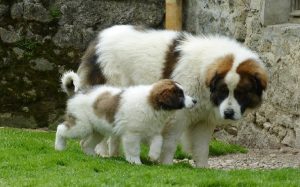 Tornjak (pronounced as torn-yak) is a large-sized, powerful, and muscular dog that is bred as sheepdogs. It is known by a different name as Bosnian and Herzegovinian Shepherd Dog, Croatian Mountain Dog, and Croatian Shepherd Dog.

It is not suitable in an apartment due to its large size and activity level. They should be kept in a house with a yard big enough for them to walk and play around.

Tornjak is a muscular dog with an almost square-shaped body. The bone is not light but also not overly heavy or course. It has a double coat where the outer coat is straight and long and the undercoat is woolly and dense. The eyes are large and almond-shaped in a brown color. Their chest is board and deep and the neck is strong.

The origin of the Tornjak is Bosnia, Herzegovina, and Croatia. the first written documents of this breeds date back to the 9th century, where the measurements and the personality traits of the Tornjak were shown. The studies on these breeds have discovered that it is more likely descended from Tibetan Mastiff. It was bred as a mountain dog that guard and protects livestock from the predators.

The American Kennel Club has kept Tornjak in the Foundation Stock Service (as of April 2019), which is the first step of recognition. It has assigned the breed in the working group destination. The United Kennel Club has recognized this breed in August 2011.

Tornjak is very affectionate and loving towards children as they are playful with them and at the same time protective of them. Therefore they make both playmates and protector of the children. They are gentle with both family and visiting kids.

Small children should always be supervised as they have a big body that might get knock on small children and injure them.

Temperament: The temperament of the Tornjak is calm, devoted, and protective. They love their family and are very protective of them. It is generally not an aggressive dog, but if it senses some threats coming towards its family, they become aggressive and try to defend them.

They make a great guard dog and also a companion as they are playful with family members.

Behavior: The Tornjak is very emotional with its family and thrives their company. If they are left alone for a long period of time without any family members interaction, they might be depressed. They are very suspicious of strangers and do not trust guest easily. Therefore, introduce the guest properly to your Tornjak before entering the house.

Personality: The personality of the Tornjak is courageous, intelligent, and friendly. They are very protective of their family and do not get afraid to stand if they sense any danger. It is a friendly dog, so makes a great companion for a solely living owner.

Training Tornjak is not for a novice or an inexperienced dog owner. They need a leader who can train them with firmness and consistency. Train them gently, without being harsh on them, as harsh treatment can scare them and they may not be able to focus on training. Use positive methods of training by rewarding them with delicious treats and vocal praises. A gentle pat on the back will also motivate and encourage them.

The average life expectancy of the Tornjak is between 12-14 years. They might suffer from the following possible canine diseases in those years:

The Tornjak come in following colors and markings according to American Kennel Club:

Cost: The average cost of the Tornjak puppy is between $600-$800 USD. The adoption of a Tornjak puppy will cost less then buying from a breeders, which is around $300 USD.